It seems like every band or musician has their behind-the-scenes guy who makes things happen. For The Beatles, it was Pete Best. For Elvis, it was Colonel Tom Parker. For Weezer, it's Karl Koch. Koch was originally a friend to the band, then a roadie, then their webmaster, and now Koch has become the producer of their latest career-encompassing DVD, Video Capture Device, and was the brains behind the reissuing of one of their most popular albums, The Blue Album.

Check out the official Weezer site at http://www.weezer.com. 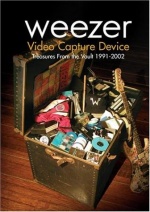 Underground Online: Tell me about the album re-release by Weezer.

Karl: It's the super deluxe re-release of their first album. It's been ten years and Universal offered to do it. I wish I knew who suggested it because I'd like to thank them. Once they gave it the greenlight, we ran with it.

UGO: What did you do for it, exactly?

Karl: I helped put it all together. I worked with the band and the management to put the bonus material together. I went through many years of photos and stuff like that to give it that historical slant...digging up the old stuff and representing it in a fresh way.

UGO: Has it been a tough job?

Karl: It took a long time, but it wasn't as hard as putting together the DVD, which I was in charge of. I guess the hardest part was delicately balancing a tasteful collection which would be looked back on as a great presentation which would unlock all the secrets of Weezer. We kind of shied on the conservative side because the original album has become such a classic.

UGO: Why are you considered the fifth member of Weezer?

Karl: [laughs] I've been working with the band since the earliest days, even before they were a band. I was always helping them out, so over the years since I've stuck with them and done everything from guitar tech, to driving the van, to designing albums.

UGO: Do you ever feel like you don't get enough credit? 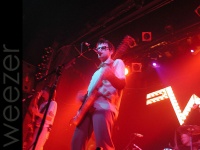 Karl: [laughs] I really can't deal with that kind of attitude. I never really say that but other people have.

UGO: How did you first get involved with the band?

Karl: Way back when they all moved to L.A. and got to be closer friends, I was just one of the gang. A mutual friend introduced me to the drummer. A year later I moved out to L.A. to do comic books and I ended up hanging with them. They all rented a house and we just hung out together. I had a truck so I started driving them to gigs. It was kind of ancient.

UGO: I read that you just started the website for fun and then it became this big thing.

Karl: It's funny how it happened. I had no computer skills as of four years ago. Really, there was a fan website and no official Weezer website. We got close to a couple of guys who were making the best fansite. So, at first, I was a contributing content supplier to them. I had my own little section. After a year or two, we bought them out because they owned Weezer.com.

UGO: Did you try to buy them off with Weezer stuff? Like having Rivers go over to his house and sign everything he owned.

Karl: No [laughs]. They were just college students, so their lives got busy anyway.

UGO: Does Weezer have a bigger web presence than other bands?

Karl: Sometimes it feels like that. How do you track that stuff? Our hits are pretty consistent. It seems like everyone is aware of the band on the web.

Karl: It's been a long saga. It took over two years to put it together. First, all the band's videos are on it. Then it's got a couple of homemade videos I directed. It's got live footage and some kind of a slapdash documentary footage from back when they were doing their earlier albums. It's quite a lot. It was a task that felt like it almost killed me like getting all the legal clearance and gathering it all together. Stuff would go back and forth for months at a time, but it was worth it because I'm very glad to get all this stuff on one disc...but man, it was insane. It's three hours worth of stuff and fan reaction has been great.

UGO: Are you still considered a roadie by this point?

Karl: [laughs] For the last two or three years, I haven't actually lifted cases or packed up the truck. I've been more full-time, taking pictures and doing the website. I guess roadie isn't the right word anymore. I don't mind lifting a case if someone needs help; that's what I cut my teeth on.

UGO: What superpower do you wish you could have?

Karl: Looking across the street, I wish I could have X-Ray vision but that's kind of dirty. I'm a huge comic book fan, but I would love to move stuff with my mind.

Karl: Yeah, that would be pretty cool.

UGO: Do you still read comics?

Karl: I do. I've turned into one of those adult comic book readers that buys alternative stuff and rarely checks out the Marvel or DC racks.

UGO: Will there ever be a Weezer comic?

Karl: [laughs] I don't think I could handle that. But there have been proposals. Fans always write in saying they want to do it, and I say more power to them.

UGO: What's your favorite movie franchise out of The Lord of the Rings, The Matrix, and Star Wars?

Karl: If we're counting the original Star Wars, then that would be it. But if you're counting modern movies, then The Lord of the Rings trumps them. I just can't get behind the prequels.