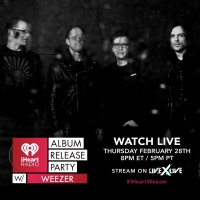 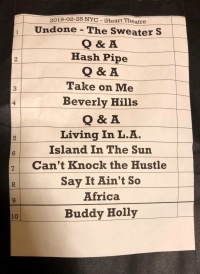 On Thursday February 28, 2019, Weezer headed to the Big Apple for a private, special album release party at the iHeartRadio Theater, to celebrate the drop of The Black Album on the following day. The intimate venue has a capacity of approx. 200, and the crowd that night was solely made up of lucky fans who had to win their way in - either via the radio contest, or via the fan club drawing (the fan club was able to snag about 20 spots for members.) The band answered some questions in-between songs (when asked about Weezer's eligibility for the Rock and Roll Hall of Fame, Rivers amusingly replied, "...I'd vote for us"), and closed the night out with a double dose of "Buddy Holly".

The hour-long event was live-streamed via LiveXLive, and also broadcasted live on iHeartMedia’s Alternative radio stations.

Some photos of the event by Rachel Kaplan for iHeartRadio