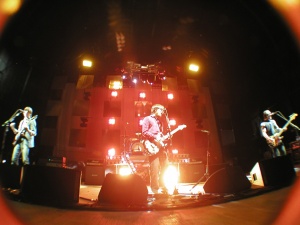 On May 11, 2002 Weezer performed in Tucson, AZ at the Anselmo Valencia Ampitheatre on the Dusty West Tour in support of Maladroit. The opening act was AM Radio.

...Tonight's show was pretty unusual for this tour in that it was in a brand new, fully seated outdoor ampitheatre. The setting and the nice desert weather created a really relaxed summer vibe, with warm breezes blowing through, and an almost county fair like atmosphere. This scene, (and its bolted down chairs) kept people sorta mellow and compartmentalized, so not a single mosh pit or crowd surfer was seen. I started wondering if maybe they weren't very into it. But I took note that most folks were at least smiling and cheering, so they must have been enjoying themselves...Later, after the show was over, every fan I talked to kept talking about how the show was "the best they'd ever seen" or how they were "blown away"! Well... ok, then! The other unusual thing about the show tonight was the setlist, which made Albuquerques "left-turn" set list look like a straight arrow! More than just a tweak, the set got a major overhaul that I wouldnt be suprised if it was actually a transitional phase toward something else....(or maybe they drew the song list out of a hat!) Not only did tonight see the debut of yet another Scott-originated untitled Jamb ("Scott, improv in a" on the setlist), but Only in Dreams was oddly wedged into the early part of the set, and "My Name Is Jonas" was the encore. Pat later said that this was his favorite show of the entire tour, pointing toward an overhaul of his drum kit more than anything else as the source of his stoke.

...Tucson got rocked! Tonight was the show and it was amazing. AM radio was great too. They started it off doing what they could to pump up the crowd. They played a really good set. No Pete Yorn for this stop, so it was straight to the rock. Weezer's set list was all I hoped it to be. The crowd wasn't too great, but we all loved every second of it. There were seats and those always suck. One of the greatest shows I've seen... ---Wendy

...I got back a little while from the show at the casino. It rocked!!! We got there, and AM radio was starting. They got us totally pumped, but there was no pit at all, and everyone was in their seats. I kinda felt bad, cause we started out a horrible crowd. Anyways, after they shuffled off, we had about a half hour wait until the Weez came out. Thats the point where everyone hopped on their feet. They started out strong, and kept us going. They even played "Happy Together." Yes, the classic oldie. It ruled!!! Anyways, the show seemed a lot shorter and I was wondering "why?" Then I realized Pete Yorn wasn't there!!! I guess he had some emergency to attend to. Anyways, Rivers announced the last song, and I gave it all I had. But after they left, everyone chanted Weezer, and they came out to play "My name is Jonas." Man, I love those guys!!! ---m.w.

...all i can say is wow. am radio was very good to me but weezer blew everyone away. what up with that setlist rivers?? tucson got gipped. the last shows are supposed to be the best. garage,undone,sex???? you guys dont care what songs are played cause its tucson? weezer rocked with what songs they actually did play, i was rather disappointed but weez is still the greatest. please come back to tucson but with more songs. (the setlist for the new mexico Albuquerque show is possibly the best one yet.) ---fx

...Just got back home from the Weezer show which I guess could be described as "experimental." It was a strange set list order that the guys picked but it still kicked ass! Only In Dreams was played awfully early and Slave [note: 'Slave' was not played -k] was an odd opening choice but I guess they wanted something different. It was too bad the crowd couldnt get too crazy down by the stage but its hard to do when the chairs are bolted down. Hopefully the guys still noticed that the vibe was great in the crowd. The Maladroit songs sounded great, Happy Together was RAD, and finally, the closing of My Name Is Jonas was fu*&^$ incredible!! Great choice by the guys! See ya all next year! ....P.S. Tell the guy from am Radio that all the AZ bashing wasn't cool. Tucson may be a ****hole (thank God I live 2 hours away) but he didnt need to diss it in between every song. AZ rocks (Tucson is just really dirty)! ---Chad, Mesa, AZ