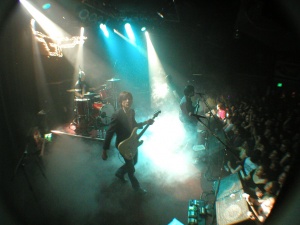 Weezer at The Whiskey

On May 13, 2002 Weezer played a free show in celebration of the release of Maladroit at the Whiskey A-Go-Go in West Hollywood, CA. As most of Weezer's gear, including the flying =W= lightning rig, was already sent to Japan for the upcoming tour the band had to use rented equipment and the flying =GP= lighting rig instead, making this show the last Goat Punishment show to date. The opening acts were Rooney and AM Radio.

...things went remarkably smooth for a show that everyone kept predicting would get shut down by the cops. While the LAPD and the Fire Marshall did both inspect the proceedings, this little weezer shindig got a clean bill of health from West Hollywood on both accounts, and the rock did happen. The crowd consisted of 100 message boarders, 200 KROQ winners, and about 200 people who waited in line at the Whiskey (reports differ as to whether they were allowed to wait in line before 6 PM or not- apparently they waited in the back parking lot so as to not upset the West Hollywood constabulary.) At one point the Whiskey announced that they were out of tickets, to the consternation of over 100 people who were waiting a long time. While some gave up and left, about 70 people were eventually let in just in time for weezer's set!
The collective crowd's voice singing out during "The Good Life" was deafening! The energy was at a fever pitch for the whole show. The presence of the hardest core of hardcore fans was definitely felt! The band got back in the club groove after 6 months in arenas, and adapted to the cozy quarters pretty well, as well as the rented gear (all their usual guitars, etc, were enoute to Japan as they played). Interesting jambs were breaking out all over, including the extended outro of the encore, "Say it Ain't So". Post show, fans were encouraged to head up the street to Tower Records, where just like last year, they held a midnight sale for the new album. Buyers of the cd got a special bonus of an extra Maladroit booklet, signed by the band!

...midnight sales were also happening all over the country, as everyuthing from Wal-Marts to Towers put out stacks of Maladroits for weez fans up past their bedtimes (sorta like me as I write this!). In some cases, fans have had to dig thru the new boxes of stuff at Wal-Mart, as confused workers look on, muttering things like "but I havent unpacked that stuff yet...". Also several other countries have released the album now, such as Italy. By the 19th it will be out everywhere!

Weezer at The Whiskey

...Oh My God! That was the greatest Weezer show (or should I say goat punishment show) that I have ever been to! The almighty weez rocked the house down with 17 of their greatest songs and bomb ass cover of "happy together" Rooney was good but failed to get the crowd excited, and AM Radio livened the crowd up before Weezer came out. I would have to say that that was definitely a great reason to skip school and spend 13 hours in a line in the alleyway of a parking lot in the 90 degree heat. Rock On!!! =w= ---Alex P

...Was a 10 hour wait for weezer show worth the wait??? HELL YES!!! ...waiting in the scorching heat getting sunburn, worrying about the whole parking problems, dealing with people that are trying to cut in front of you, etc... I was so fortunate to get tickets while some were totally cut off and wasnt able to get any. I have never seen Weezer rock so hard in my life. They looked like they were enjoying themselves and the weezer crowd has gotten a bit too aggresive that i couldnt stay in the pit for long or else i would have gotten trampled over. It seems to me after this show that weezer is not only bringing back music but bringing back pure ROCK music. The set list was the best set list ever. I cant say it enough how awesome this experience was for me. At this rate I think weezer is ready to conquer the world. i hope you guys have a safe trip to japan...you guys ROCK!!!

...Best day ever ? possibly. well maybe not the day but the night rocked!!!! i spent the day roasting in sun w/ about 120 other weezer fans hoping to get tickets.it was quite boring but definitely worth the wait when we finally found out about ten hrs later that we got in!! the show was great. rooney came on first . they were really good, reminded me a liitle of pavement and oasis. am radio was also really good. lots of energy. i wanted to hop around and dance but i was reserving all the energy i had for the weez. the crowd went bananas when the =gp= logo was revealed. weezer finally took the stage around 10:30 or so and they were sooooooo awesome.the guys all rocked so hard it was great! rivers said lots of goofy things , the best was "i wanna give a shout out to all my special friends...connsider yourselves shouted out". he also flipped off the crowd and evryone was happy to do the same back to him. the place was so small that no matter where you were you could get a good view of the band. good times were had by all. i have to say this was probably the best time i've ever had a a show.the 10 hr wait, the horrible sun burn, it was all worth it. would i do it again ? in a heartbeat! for any other band? never! ---Rochelle Anne

...I just want to say that I was extremely lucky to get in! My friend and I arrived there at 12:30 pm to line up for standby tickets and we barely made the cut close to 10 pm! I got to see the last act of A.M. Radio, and I loved their songs. They seemed like a cool bunch of guys with kick ass tunes. And finally there was weezer... what can I say? Of course they rocked out loud like they always do. I was so psyched to hear "Why Bother?" That really pumped the crowd up, and I loved their cover of "Happy Together." It was so memorable ending with my favorite weezer song of all time, "Say It Ain't So." After the show, my friend and I hurried over to Tower Records to purchase our autographed copy of Maladroit after 12 midnight. I can honestly say that this has got to be the best weezer show I have ever been too and the most memorable one at that. Rivers, Pat, Brian, and Scott-- you rock!!! ---Toni-Lynne from Irvine, CA