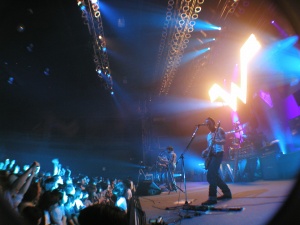 On May 16, 2002 Weezer performed in Sendai, Japan at Club Zepp on the Japan World Cup Tour in support of Maladroit. The opening act was AM Radio.


...Club Zepp [well, they just call it 'Zepp', its kind of a chain of clubs all over Japan] in Sendai is sort of a little mini theater that holds about 1000 people. Like many of the clubs in Japan, its small but very high tech and organized. HMV Japan set up a booth with all 4 weezer cds outside the club doors, and a full line of shirts was available, including a new "world cup tour" shirt. On stage, the full "Midget/Dusty" stage set-up was rockin, for what will be its last haul. Tonight another "out there" setlist threw folks off while stoking them up! "Holiday" saw its first performance ever with Scott, who was a bit shakey on the breakdown part, but says "I had to learn the song in soundcheck. Give me 2 days to practice it and I'll smoke it!" The set had a very unusual mellow ending, with a Scott jamb for the last song, leading to an extended, almost psychedelic "Death and Destruction" for the encore. The crowd was doing the jump up and down thing, and even some crowd surfing, which is rare for japan, in my memory.

...i liked the show last night. am radio-so cute & pop. even though the crowd didn't know who they were, i think their music immediately seized people's attention and heart. good job,guys! weezer-i was amazed by the stage props & set...when i saw two gigantic =w= sign on the stage,i thought 'it's so BUDOKAN !'. i guess they had little tech problem so the performance and the atmosphere was slightly affected by it. so the show was kind of patchy(compared to the last japan tour,which was very tight and rockin'),but i liked it somehow. setlist was good, it covered long history of weezer -all the great classic weezer songs and also it allowed me to take a look into their future (2 unreleased songs:modern dukes and yellow camaro). surprisingly,it was the first time for me to see their set without buddy holly but they have so many good tunes and i was totally entertained, i didn't notice it until a guy told me 'it's a shame that they didn't play the song tonight' after the show. some of the personal best moments: surf wax-a cue for the diving gores! sheer heat. glorious day-true stadium rawk! island-beautiful and so sad...even sadder than the recorded version. fall together-what a heavy riff..awesome. holiday-i loved it when the chorus(postcard part) went a bit strange and rivers began laughing and couldn't stop it...everyone in the house smiled. the best thing about the sendai show was,for me, the fact they were trying to do different thing.i noticed some changes (occasional guitar solos, talk-singing) and they gave me a fresh feel. those changes may work,may not work.some like it,some don't. but,at least they are not repeating themselves-which is much easier for them, playing crowd pleaser/best hits kind of show again and again. so i was happy last night--because weezer is marching forward! ---mariko

...i went to the first night of this tour at sendai. it was pretty rad, and everyone loved it and had an awesome time for sure. sadly, there were some songs that everyone wanted to hear but weren't played - like buddy holly, my name is jonas, and el scorcho etc, but i didn't expect they would play island in the sun, so i was so happy that i could hear it -- specially when it comes to rivers' high voice "you'll never feel bad anymore.." which gave me goose pimples! also we enjoy his a bit japanese including something we could never guess what he meant... :> ---mayo

A recording of "Holiday" from this concert appeared on The Lion and the Witch.