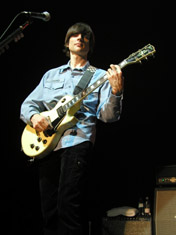 On May 18, 2002 Weezer performed in Tokyo, Japan at Club Zepp on the Japan World Cup Tour in support of Maladroit. The opening act was AM Radio.


...Club Zepp Tokyo! Quite a famous large club, that seems to host just about every good band at least once. Its really a nice sized little theater, inexplicably situated directly underneath a gigantic ferris wheel, right on Tokyo harbor. The kids do know how to rock it here, I even saw an authentic Goat Punishment T-Shirt in the audience! Now how did that girl get a hold of that? Anyway, another suprise setlist! Tonight saw the first time "No One Else" was played with Scott in the band, and the world debut of "The Story Is Wrong", a song by Pat, with Pat on vocals! Also, the rarely seen "Slob" was in the mix, as was the lesser seen "Smile" and "Love Explosion". Everyone in the band agreed that the latter part of the set was the most rocking, but Pat was really having a ball all night, and hopes it can always be as fun as it was tonight. Scott wasnt feeling it the way he wanted to though. Such is the nature of the beast- as soon as one guy sorts out his scene, someone else has a new problem. But everyone agrees that the current set selection process is their favorite, and once all the songs have had equal chances for practice, things are gonna be amazing. The crowd was understandably stoked at the set, creating unbeleivable amounts of noise during "No One Else" "Dope Nose", and "The Good Life".

Now, down the street we saw a very strange pet store. WHy on earth would anyone feel good about having a bat, a hairless guinea pig, a chipmunk, or a prairie dog for a pet?? But there they were, legally for sale. Photography was mysteriously against the rules, but I tried anyway, because this store gave me the willies. 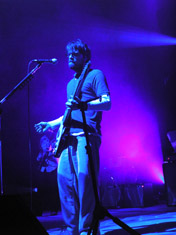 ...I've just got home now from Zepp Tokyo. I had very good time! Thank you so much guys! I was very lucky to be the show which The Story Is Wrong make its debut. I like its ending. It's a song written by Pat, but it doesn't sound like SG, it's Weezer song! The Best of Weezer type of setlist seemed quite effective to hype up the crowd. When huge =w= sign went up behind the drums, roar went louder and the show got its climax. Unfortunately it seemed they don't understand well what Rivers talking between each songs because it's in English and Spanish. Sorry Rivers! The guiter feedback thing at the last of the show was so cool!! I love that! I'm going to be few more shows, so today Japan World Cup Tour has just begun to me... ---Ranko Y.

...Today's set list containing "no one else" was the highest thing for me. It is after not thinking that it did by today's live by no means. ("no one else" is as favorite music as it is made the arrival-of-the-mail melody of a cellular phone!) From the beginning to the last, it became sweated, and danced off its head and sang, and screamed. The band which can be excited like this is only weezer. Thank you for a really great night!! It became the highest recollections!!! ---chocolat

...well,I'm gonna report how was today's show from audience side. AM radio whooped us up! in a moshpit many people jumping & seems having fun. singer & guitar player (Jason..I think..)were standing outside of the building after the show. some people asked them to take a picture together&autograph. I was in the moshpit firstable but when weezer started playing (especially they started playing "no one else") The moshpit was a chaos! I couldn't breath properly. So I had to go little bit further from the stage everyone's jumping & singing I could see so many people with happy smiling face&sing along and many guys went past over my head. I just looked up some message board of weezer fun's website(japanese) Some people who went to ZEPP today has left messages already. they said today's show was awsome & loved it. One guy left the message that he saw Brian before the show. and it was like autograph session for a moment. ah!and I found some(not only one or two)message which mention about Rivers' beard. ---Marie I.