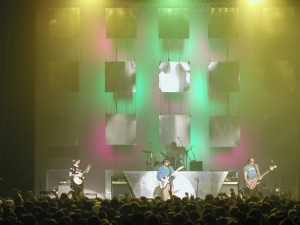 On May 22, 2002 Weezer performed in Osaka, Japan at Club Zepp on the Japan World Cup Tour in support of Maladroit. The opening act was AM Radio.


...Osaka! I think Osaka is the second largest city in Japan, and its mighty impressive. They like to do cities big and tall over here, and they also like to hide the Subway sandwich shops and Mos Burgers deep within these cities, so that theyre impossible to find even after hours and hours of walking. On a different note, ill tell ya, when everyone in the hall is chanting "weezer!" in unison, while the band is still on stage between songs...well thats just amazing. Today's crowd in Osaka's Zepp were deafening! Today's show saw the first performance of "Getchoo" in a very long time. I cant remember if it was played in the summer of 2000 or not. If not, this is the first time since 1997... Also, "American Gigolo" saw its first post Maladroit recording performance tonight. The mixed up setlists are keeping everyone (including the crew) guessing...

...I've just got home from ZEPP OSAKA. How can I say "THANK YOU "to you guys! Tonight show was really great! I was just lucky to be there "cool rock show"tonight!! When you started playing " boddy holy " (That's my special ) I can't stop singing loudly... and I lost my voice. Now I am writing this mail with humming "boddy holy". I think it'll remain for a while. But I expected more new songs (keep fishin'!!!) from maladroit. I heard you guys are coming to "Summer Sonic" again. When you come to here in Osaka next time, I'm gonna have a special event for WEEZER. WEEZER ICHIBAN! ---M#A#S#A#H#I#R#O#C#K#S

...the only word I can say for this gig is that it was really , truly, extremely, "Amazing!!!" .all the fans were really mad when they ( including me ) heard the songs from Pinkerton. also, we were really glad and happy when Scott came and gave us his signiture. he was really friendly ! Please pass him a message that we really think that his a suitable bassist for weezer. the most craziest thing was when Rivers come out alone !! I couldn't believe that I could shake hand and stay beside my HERO !!!! though it was really a regreting experience that I didnt have my camera with me !!! douh !! somehow he seems quite upset. I wounder what happend to him.. anyway, I'm really looking forward to come and c u guys tommorow again !! good luck and please enjoy the rest days in Japan ! Also, I would like to go to the Summer sonic as well !!! ---Aki.

...thank you sooo much for the great show! it was awesome... and every other word you would find if you looked up "awesome" in the thesaurus... everything sounded great and the atmosphere was great and i felt great being there :) and thank you scott for taking the time to give us your autograph. we DO love you! my friend yuko is completely in love with your arms... your "tattooed, sexy, buff" arms. she won't shut up about them. i'm so happy i got to meet rivers. this was definitley one of the best nights of my life. THANK YOU! hope you have fun touring the rest of japan! ---kei