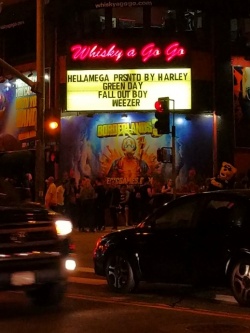 On Tuesday, September 10, Weezer, along with Green Day and Fall Out Boy, played a "secret" surprise show that happened at the historic Whisky a Go Go in West Hollywood, CA. Earlier that day, their massive co-headlining tour was announced, and the show was a celebratory kick-off to the Hella Mega Tour happening in the summer of 2020. With a capacity of approx. 500, the intimate venue sold about 200 day-of tickets to fans who had waited in line that morning for a chance; with the rest going to industry-insiders, as well as fellow musicians like Courtney Love, and celebrities including Seth Green and Audrina Patridge of The Hills.

It was also the live debut of "The End of the Game", which was just released earlier that day.