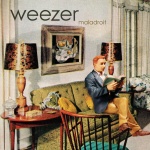 Maladroit is the fourth studio album released by Weezer. During the latter half of 2001, with new bassist Scott Shriner freshly in the lineup, Rivers Cuomo began to write many new songs, and their overall style reflected a harder rock. At the time, he was reading lots of Nietzsche. He said in a magazine, "I want to conquer far and wide in the name of Weezer." Determined to make them the greatest band in the world, Rivers ironically took an approach that upset many fans and the rest of the band.

He took complete control of Weezer in a way that he previously never had. He was writing new songs at a furious pace, as evidenced by their BBC performance that summer - rather than the standard re-recording of released songs, all new songs were recorded, which included many songs that would eventually appear on their next album.

As the touring behind The Green Album wore on, the material became progressively heavier, as new song after new song was debuted. Soundboard recordings of demo sessions and live performances from the Midget Tour were posted on the official website throughout the summer and fall.