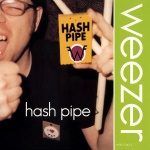 "Hash Pipe" is the lead single and third track from Weezer's self titled 2001 album, known as The Green Album.

"Hash Pipe" was the first single released from the band's long-awaited third album, Weezer, and the only SS2K song to make it onto the album (although "Dope Nose" and "Slob" were later released on Maladroit). According to an interview with Rivers Cuomo, the song was written on the same night as "Dope Nose". The story is that he took "a bunch of Ritalin and had like three shots of tequila", paced around for a while, then wrote both songs. It was inspired by a male transvestite prostitute known for rambling to people in Santa Monica.