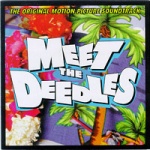 "American Girls" is the only officially released song from the Homie catalogue. It was written by Rivers Cuomo in 1997 during Weezer's hiatus and released in 1998 on the Meet the Deedles soundtrack.

The original incarnation of "American Girls" was a fast paced driving rock number. Fans have dubbed it the "American Girls (Hard Rock version)". The song was performed three times in the winter of 1997 in local Boston clubs. The first performance was in October at a Weezer try-out show. After another performance at a Weezer try-out show, the song was switched to the Homie setlist.

The official and released version of "American Girls" is a slowed down, primarily acoustic, R&B ballad, recorded in January 1998 at a Boston pro studio. The song makes extensive use of the harmonica and gang vocals. It should be noted that this is the final released recording to feature both Rivers Cuomo and Matt Sharp, as Matt Sharp had left the band prior to the recording to pursue The Rentals full time.