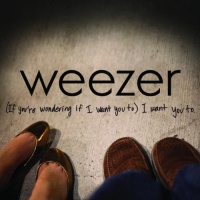 "(If You're Wondering If I Want You To) I Want You To" is the first single from Weezer's seventh album, Raditude.

The song saw its official digital release on August 25, 2009. Nine days prior on August 16th, Wal-Mart accidentally put the entire song up for sale when they were only supposed to post a 30 second clip as other online retailers such as Amazon.com did. Within an hour the song was leaked all over the internet via YouTube and Albumsix (which had a direct link to Wal-Mart's online Weezer store). Wal-Mart was quick to remove the song after a day or so, but fans were still leaking it through other sources. Due to the leak, the song began receiving radio station airplay as of August 18, sooner than originally planned.

Reception has been mixed from both fans and critics.