Weezon.com: Great job on the "Photograph" video. How involved were you with the conception of it?

Weezon.com: Did you do all the filming and editing yourself?

Weezon.com: What equipment and software did you use?

Weezon.com: How long, from conception to completion, did the video take?

Weezon.com: What are your favorite and least favorite parts of the directing process?

Karl: I love envisioning the finished project (conceptualizing), breaking down whats needed to execute the shots, and editing the finished shots together. But I'm not so good at telling people what to do, that's my weakest point, but I'm working on it. 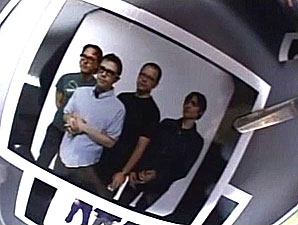 Weezon.com: What was your plan for promoting the video, since there was evidently no label involvement?

Karl: It was a guerrilla video, and the plan was to send it to all the indie shows and just see what happened. I think the corporate structure of the video world wasn't ready to swallow its pride and ask for the video. Or maybe they never even found out we had one.

Weezon.com: Why haven't we seen the video on the 'big-shot' music stations? Do you think we ever will?

Karl: See above. We didn't send it to them, so unless we do that, or they ask for it, I guess not!

Weezon.com: Is this the method of operations that you guys have decided for future videos as well, or is that yet undecided?

Karl: Undecided. I think we'll do more of both styles.

Weezon.com: Are there plans for any more "directed by Karl Koch" videos?

Weezon.com: What's the deal with Scott and Rivers at the end of the video?

Karl: I'm just glad I was rolling at that moment! I dont know what was going on, but I often study it to try and learn more.

Weezon.com: How long have you and Pat Wilson been collaborating on Southern Fried Swing, and how did it come about?

Karl: Pat and I just seem to naturally get insane when put together for too long. Freestyling over a crappy Casio just felt like the perfect recreational activity. The origins are older than Weezer, actually. But we really got rolling around '93. Then, once Weezer started touring, the recordings flourished, as there were a lot of boring hotel rooms. So we got a 4 track and went nuts.

Weezon.com: How many songs total are there completed?

Karl: Well, if you must call them "songs"...um, T think there's 21 on the CD...but those were pulled out of about 35 full 4 track tapes. Hundreds of little ditties. I think the ones we didn't use were too crappy. Or only me and Pat thought they were funny. (Sort of like the 21 we did use.)

Weezon.com: When can we expect the SFS record to be released?

Karl: I'm pressing that CD plus the Karlophone CD soon...I hope they'll be available by summer.

Weezon.com: How serious are you about your Karlophone project, and when can we expect Press Any Key... to be released?

Karl: See above. I'm very serious about Karlophone, it's my primary musical outlet and I am constantly thinking about how to improve it...I just rarely have time to work on it.

Weezon.com: Which do you enjoy recording more - SFS or Karlophone songs? Why?

Karl: SFS is a spontaneous thing that's hysterical when we're recording it. But Karlophone is engrossing, just obsessively getting down in the lab and plugging away till something sounds cool. I enjoy it best.

Weezon.com: What "official title" (besides "bootknocka") would you give yourself if you absolutely had to?

Karl: Webmaster...archivist...photographer...videographer...? I got it: media pimp. Kidding...

Weezon.com: Most band workers remain in the background. Did you ever believe that being named the 5th member of Weezer by fans and your hard work would bring you fame in a sense?

Karl: I sort of saw it coming, but I felt helpless to stop it! Even back in 96-97 people were shouting my name when I went to set up the guitars.

Weezon.com: Take us through a typical day in the life of Karl, on tour and off.

Karl: Showday, boring version - no interviews or other outside forces at work, no special events: Theres a lot of email answering for one...basically wake up on the bus about noon, brush teeth (I hope), go inside the venue, set up my tiny office situation, beg for a phone line, get the video cameras and still cameras charged up and cleaned up. By this time soundcheck is starting, go out, film it, shoot pix. Post soundcheck - dinnertime, catering. Then a combo of web/computer work, shooting random pix and video till showtime. Show is solid work, 2 vid. cameras plus sill photos, post show is dumping pix into the computer, labeling videotapes, cleaning up, etc., and as much web time as possible before we gotta pack up and go to the bus. On the bus, while rolling, eat dinner (err...late dinner) then I prep the corner report: choose and make resized copies of the pix, arrange the HTML, write the text, edit the radio reports and random fan quotes, etc. to be posted the next day sometime. To bed about 5-6 AM.

Days off are basically wake up, go into the hotel, work on other things, catch up on life: shower/eat/go for walks. Good days to update non karls corner parts of site, or work on video clips and other secret projects. go on ebay and work on completing that vintage My Pretty Pony collection.

Weezon.com: How many e-mails do you receive in a typical day?

Karl: These days it's down to about 125. It has been around 300+ consistently at times.

Weezon.com: What do you like most/least about your job?

Karl: Most: it's not a cubicle/shipping dept. job! It's often very fun, and I really can't complain. Least: it never stops!! No time for a personal life whatsoever.

Weezon.com: Do you ever rest?

Karl: Most nights I sleep alright, not always enough. I hardly ever "chill" when I'm awake, I always am working on something.

Weezon.com: What is your favorite place (arena, club, or show location) to watch the band at?

Karl: I never watch the band recreationally. It used to be scanning for guitar and drum trouble, now it's filming and shooting pix. I think it's easiest for me at an arena, but small clubs are always magic. I love it when I can tell the crowd is freaking out - it makes me proud of the guys. Man, that's sappy!

Weezon.com: What would you be doing if it weren't for Weezer?

Karl: More of my own music and more art in general.

Weezon.com: What is your opinion of all the recent correspondence between Rivers and the fans of the band?

Karl: It's a very cool thing, impossible except in modern times. Of course, breaking down the artist/fan relationship has its perils.

Weezon.com: What do you think of The Green Album?

Karl: Solid. Did the job. I wish "Photograph" was the first song. Production too "airtight" for my tastes.

Weezon.com: What do you think of Maladroit?

Karl: Very cool, a big step towards an album I can actually listen to for enjoyment. (Its hard to do that when you are so so familiar with the songs [i.e. the first three records], but these I feel like I'm just getting to know.)

Weezon.com: What is your opinion of the more "hardcore" Weezer fans?

Karl: They rule. Some of them can get so emotional and intolerant of other's opinions sometimes, but overall they really are the "core" and are very important.

Weezon.com: What other artists are you listening to these days? What is in your CD player right now?

Karl: I make these CD comps. when I'm home. Since I type up the labels in Word, I'll just copy you some songs from the ones I'm into right now:

Weezon.com: Which member of the band would you say you are closest to, and why?

Karl: I think Pat by a hair. I'm close to both Rivers and Pat, and have a natural (yet different) rapport with both. But rivers has so much on his mind that he is sometimes just unable to chill as a budrow. (Nothing wrong with that, of course, he's a busy man and very good at what he's doing with the band.) With Pat it's just au naturale chilly chill. We both dig the dusty raps so that helps.

Weezon.com: What is your favorite Weezer LP song, b-side, and unreleased song?

Karl: "Falling for You" (in danger of being replaced by a Maladroit or album 5 track), "Jaime," "Superfriend."

Weezon.com: What is your most prized Weezer possession?

Karl: ...This is tuff...I guess my cassettes of the early stuff, which were made at the time, often in bizarre sequences because I had to add what I had access to at the time, and blank tapes were a rarity. I have major nostalgia when just handling them, let alone listening to them.

Weezon.com: Can you give us any hints as to what treats are in store from Weezer in the future?

Karl: Well, we do in fact want to do a DVD sometime, and the b-sides record, but no idea when.

Weezon.com: Is the VHS/DVD in the works? If so, will "Photograph" be included?

Karl: Not in the works yet, but on the planning board. If I'm in charge, it will include "Photograph."

Weezon.com: Can you give us some titles of album 5 songs, and what you think of the songs so far? Are they similar in style to Maladroit?

Karl: These have been revealed on the page. I'd say Maladroit is the starting point for these. I really love some of them! And I truly cant knock any of them so far.

Weezon.com: As a longtime friend/employee of the band, one who has witnessed it's evolution first hand, which era would you say you've enjoyed the most?

Karl: I have heavy nostalgia for the older days, but I'm such a sap that I start looking back fondly on anything more than 4 months ago! Haha... The van days (mid-1994) were utterly unique...um... I really must say things have been so good for the last year, and really so good since last September... I think that I appreciate the current time the best and wouldn't want it to go back to some earlier phase.

Weezon.com: For what purpose is every show recorded and archived? 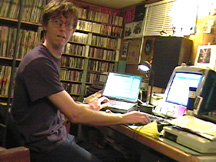 Karl: For Channel Weezer, launching in 2009. ...That sounds pretty cool actually! Well, because you never know! Plus we have the technology, we can rebuild him...etc.

Weezon.com: What do you and the band think of all the Weezer fansites?

Karl: They rule. They really do. The level of detail is amazing on some of them. The collective MP3 coverage is awesome.

Weezon.com: How many licks does it take to get to the center of a Tootsie Pop?

Karl: None. You never get to the center.

Weezon.com: For my last question, I'd like to play a game of word association. Tell me the first word (or more!) that comes to mind with the following...Rivers Cuomo.