From Weezerpedia
(Redirected from Detour)
Jump to: navigation, search 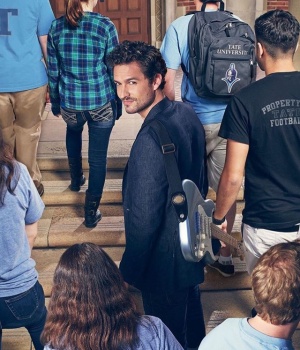 Promotional image for DeTour
DeTour was an un-aired television pilot for the Fox network based on the life of Rivers Cuomo.

In August of 2014, The Hollywood Reporter reported[1] that Psych creator Steve Franks had pitched a coming-of-age story about "a 30-something rock star who, unable to rationalize his success and worried that he may not have the tools to repeat it, walks away from the spotlight at the height of his fame in an effort to rediscover the parts of his life he missed while he was busy becoming a massive success." Franks would reportedly pen the script and executive produce the show with Chris Henze (also of Psych) and Willie Mercer.

In early 2015, Cuomo told fans that an English version of the Scott & Rivers single "California" was in consideration for inclusion in the DeTour pilot. This English version instead became "California Kids", the lead track from Weezer's 2016 self-titled album (The White Album).

In the summer of 2015, Cuomo confirmed that the show had not been picked up. As he stated in an article by Vulture[2]:

“DeTour did not get picked up,” he said. “So that whole chapter is closed. It’s weird; in music if you make an album and your label decides not to put it out, you can bring it to another label and sometimes it can be a big success. At least it gets out. In TV, I’ve learned, it’s not like that. The pilot was made, completely finished, and we can’t show it to anybody! No one will ever see it. It’s a huge waste of money.”

In 2020, Cuomo confirmed via Riverpedia that he had a cameo appearance on the show as "Professor Kitts". He also mentioned that the band in the show was originally named after the song "Modern Dukes", but this had to be changed to "Crimson Dukes" due to a copyright dispute.