The song was originally written (under the title "I'm Your Man") in 1991 while Cuomo was living at 2914 Urban Avenue in Los Angeles. The song was brought back in 1997 for two shows as the band Homie, which Cuomo described as a chance to play "goofball", "country" songs. The song was rehearsed for a Homie album that never materialized. When asked about the song at Nerd Night 2 in 2011, Cuomo expressed an intent to release the original demo eventually [1].

In 2009, it was included on a Homie tribute album recorded by Lifetaker and runnersdialzero. 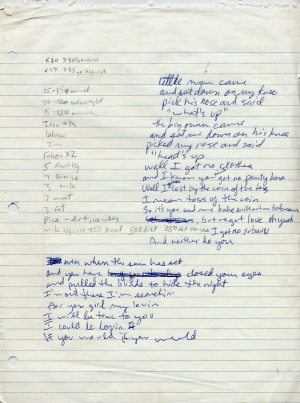 Well, I got no clothes
And I know you ain't got no pantyhose

Well, I guess I lost by the coin of the toss
I mean "toss of the coin"
So it's you and me, babe, without any between us
But we got love, oh yeah

I got no Subaru
And neither do you