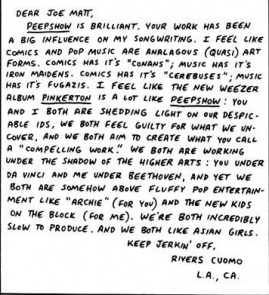 Cuomo's letter to Matt
Joe Matt is an American cartoonist, best known for his autobiographical comic book, Peepshow. Rivers Cuomo has cited Matt as an inspiration in his songwriting.[1]

Rivers Cuomo told Addicted to Noise in 1996, "Lyrically, I think I'm influenced by very few other musicians. Maybe Lou Barlow and Brian Wilson and some of his later songs. They just seem very direct and honest and unpretentious. Other than that, I think I'm hugely influenced by comic books. Especially the autobiographical comics like Joe Matt's Peep Show." The name "J. Matt" appears on the map included in the liner notes to Weezer's album Pinkerton.

Cuomo wrote a letter to Matt in 1997[2] which was later published in Peepshow, and was followed by an interview between the two: 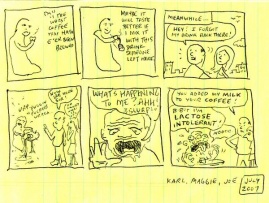 On July 14, 2007, Karl Koch and Joe Matt (along with a friend, Maggie) collaborated on a six-panel comic strip, drawn on a piece of lined paper. The comic was later uploaded to the Karlophone Myspace profile.[3]