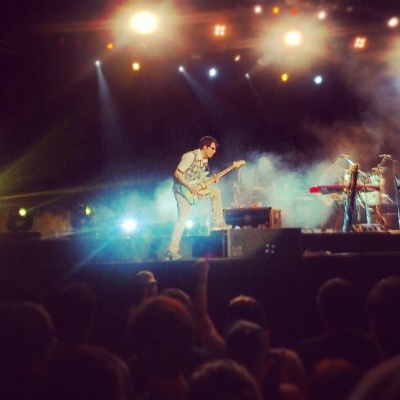 Today (Friday Aug 2, which it already is over there), Weezer plays the Jisan World Rock Festival in a huge forested ski resort about an hour outside of Seoul. The 3 day festival has a ton of cool bands playing including our old '96 USA tour mates Placebo, and legendary rapper Nas. Oh, and Jamiroquai too. We are playing the first night, headlining the main stage to get the weekend party started. We played this festival (although it had a slightly different name I believe) back in 2009 and it was a blast, and our first time in Korea as well. The company that brought us over and the record label people were super nice to us last time, and the fans were nuts! We've been looking forward to returning, and finally we are here.
Todays show includes a special treat for the Korean fans, which Rivers was hinting about online and in soundchecks this past week on the west coast. The guys will be playing a well known (in Korea) song in their set, (no not a Psy song, something a little more 'deep', namely "Monjiga Dweeo" by the revered and tragically short lived Korean folk rock hero Kwang Seok Kim). The way the band was handling it, it sounded like a giant epic track laden with emotion... kind of a Korean 'Tragic Girl' in a sense... we'll see how it goes!
http://jisanworldrockfestival.com/
CrowdAlbum photo and video gallery (includes bands from the whole Friday festival day):
http://alpha.crowdalbum.com/gallery/51fcadbf879ea2cf0d0001bb/Jisan-...