"Lemonade" is the third track from Alone: The Home Recordings of Rivers Cuomo.

"Lemonade" was previously unheard before the album's release. The song was said to be in the possession of some fans some time ago, well before it was released, and the lyrics were known before this due to being on the COR. 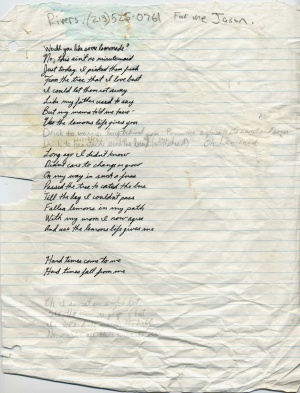 Would you like some lemonade?
No, this ain't no Minute Maid
Just today I picked them fresh
From the tree that I love best
Couldn't let them rot away
Like my father used to say

Long ago, I didn't know
Didn't care and couldn't grow
On my way in such a fuss
Passed the tree to catch the bus
'Til the day I couldn't pass
Fallen lemons in my path
So with my mom I now agree
And use the lemons life gives me

Hard times come to me