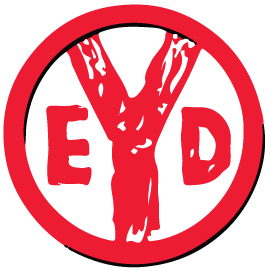 EYD is an insignia appearing in the liner notes for Weezer's 2014 album Everything Will Be Alright in the End as well as on official merchandise from that album cycle. The insignia appears on the back of the album's liner notes, following a line that reads "Transmissions received and sorted by Joe Laffoley, 1965, 4th level literati."

Though never officially confirmed, the acronym likely stands for "Except You Die". During the coalescence of earlier concepts (The Sea Opera, Ecce Homo) into the concept that would ultimately manifest as EWBAITE, the working concept title was Everything Will Be Alright in the End Except You Die.

In 2020, a user asked Cuomo about the meaning of "EYD" via Riverchat, to which Cuomo responded "Greek tragedy,"[1] adding "if you turn up the album real [loud] at the end you can hear me say it." [2] Indeed, Cuomo can be heard whispering the words "except you die" at around 4:11 in the song "Foolish Father".