"Paperface" (sometimes written as two words, "Paper Face") is an early track by Weezer. A Rivers Cuomo demo of the song has also been released.

"Paperface" was first recorded by Rivers Cuomo as a solo demo in May of 1992, which would later see release on Alone II. The song begins with Rivers singing, "Scratch track, momma, scratch track momma," possibly implying Cuomo meant to redo the vocal.

Later that year, Weezer recorded the song for their Kitchen Tape demo. The Kitchen Tape version was later included on the deluxe edition of The Blue Album. The original solo demo of the song was eventually released on Alone II: The Home Recordings of Rivers Cuomo. In 2009, Rivers Cuomo recorded an acoustic rendition of the song, with musician Joe LoPiccolo on guitar, for Sirius Satellite Radio. This version later appeared as a bonus track on the DVD release of Not Alone: Rivers Cuomo & Friends Live at Fingerprints.

Photo of Amy Moore from the liner notes for Alone II

"Paperface" has been received very well by fans. It is fairly obscure, and has only significantly been received by Weezer's more die-hard fan base, but is still well-liked. It received recognition in "The Very Best" category of Teenage Victory Songs, a Weezer songblog. It is often asserted, however, that Paperface is a song that Weezer "could never perform today." 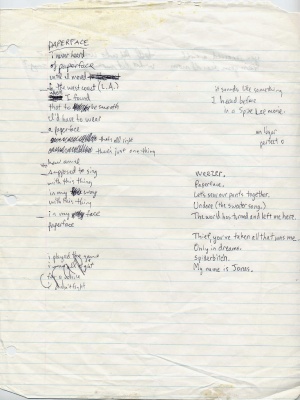 That's alright
There's just one thing
Her wedding ring, or anything
She left behind, forgot to pack
How the hell is she gonna get it back?

Paperface
Paperface
I never heard of paperface
Until I moved to the west coast (L.A)
Where I found that to be smooth
I had to wear a paperface

But that's alright
There's just one thing
Her wedding ring, or anything
She left behind, forgot to pack
How the hell is she gonna get it back?