"Pink Triangle" is the third single and eighth track from Pinkerton.

"Pink Triangle" was composed late in the Songs from the Black Hole/Pinkerton period, and is said to be one of the songs that helped steer Weezer lead singer Rivers Cuomo's creativity toward the latter concept. Rivers explained in an interview on Fresh Air with Terry Gross that the song was inspired when he saw a beautiful girl in one of his classes at Harvard in 1996. He watched her over a period of a few weeks and began to have fantasies of marriage, and was crushed when she came to school with a button of a pink triangle on her backpack. He had taken it to mean she was a lesbian.

Musically, the recording features the use of a xylophone on the intro and outro, and more slide guitar from Cuomo - which seemed to be a favored guitar sound at the time, also appearing on "Getchoo", "No Other One", "The Good Life", and "Waiting on You".

In early 1997, the song was chosen to be Pinkerton's third and final single. However, the song never ended up getting past the promotional stage. Two Pinkerton sessions outtakes - "Getting Up and Leaving" and "I Swear It's True" - were dusted off and prepared to be released as B-sides on an eventual retail single, but never issued.

The song was remixed in order to give it a more radio-friendly sound in preparation for its release as a single. When the band went in the studio to change the song, it was determined that the bass line needed some reworking. At this time, then-bassist Matt Sharp was away beginning sessions for a second album for his side project The Rentals, and was unavailable to record. The band brought in bassist Scott Riebling to replace him and record the bass sound. This was also done for the two B-sides. Likewise, Cuomo changed some of the lyrics and vocals for "Getting Up and Leaving".

Promo singles including the remix and acoustic version from the Shorecrest High gig were sent to radio. The song did not fare well on radio - possibly due to the repeated use of the word 'lesbian' - and Geffen Records opted not to release a retail single. The two B-sides remained in the vaults until the 2010 deluxe edition release of Pinkerton, and were considered to be 'holy grails' by many fans in the years prior.

Despite the eerie timing of their spring 1997 releases, and coincidental subject matter, the song was not written for, nor inspired by, Kevin Smith's film Chasing Amy, which also told of a man falling in love with a lesbian. In fact, Smith had never even heard the song when asked about it, and Rivers was not aware of the film being in production when writing and recording the track.

The live acoustic version of the song, which can be found on several releases, was recorded at a November 6, 1996 gig at Shorecrest High School in Seattle. A student at the school had won a radio contest to "have Weezer play at your school". The kids whoop and holler at each mention of the infamous 'L' word.

Pinkerton's 3rd single. The video includes studio work plus live footage from Reading '96 and shows in the summer of '97.

-Karl Koch on the "Pink Triangle" music video, from the liner notes for Video Capture Device

"Pink Triangle" was given an unofficial music video, directed and edited by Karl Koch, as part of the band's Video Capture Device release. The audio used is the single version. The footage is comprised of Weezer recording the song in studio and playing it live in a variety of locations during the Pinkerton Tour. Koch opens the video with a short narration: "January 1, 1996. Day 1. Sound City Studios - Van Nuys, California. They seem to be working on something with the phrase "married in my mind" repeated a lot in it. I'd never heard this song before today."

The performance heard on the "O.Z. ep" and the "Pink Triangle" promo CD. Shorecrest won a contest held by 107.7 The End in Seattle, for a lunchtime performance by Weezer. Apparently the kids were stoked to learn some new vocab words...

-Karl Koch on a live performance of "Pink Triangle," from the liner notes for Video Capture Device

According to Julie Kramer[2], a photographer who was friends with Cuomo during the time, the planned retail single for Pink Triangle would have featured a photo of Cuomo in drag as the cover. Though the single never materialized, some of the photos have appeared on Kramer's website, as well as in the liner notes for Alone, Alone II, and The Pinkerton Diaries. 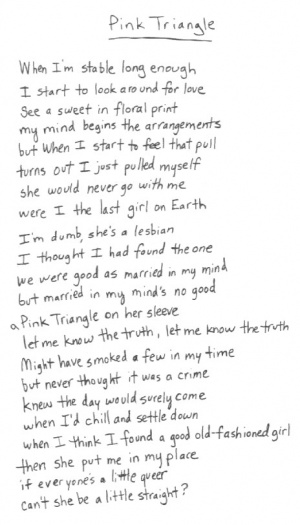 Might have smoked a few in my time
But never thought it was a crime
Knew the day would surely come
When I'd chill and settle down
When I think I've found a good old-fashioned girl
Then she put me in my place
If everyone's a little queer
Can't she be a little straight?