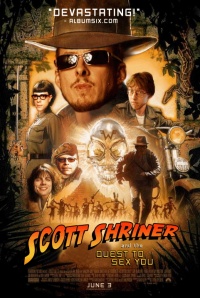 Quest to Sex You
On the Albumsix forums, a new in-joke about Scott Shriner (who is already known as being hardcore) was made by boardie Shoemeister: devastating:

"Oh, you didn't hear? It was Scott that set Universal Studios on fire.
Devastating."

In Weezer's 6th Webisode, entitled Webisode 6: Devastating Dog Days, Shriner made a reference to the Albumsix "devastating" meme. In the concluding seconds of the video, a voice says to Scott "Just say it!" and he responds with a stern look at the camera and a harsh growl of "DEVASTATING."

On some of the merchandise for the Troublemaker Tour in 2008, the image of the band from the cover of Weezer (The Red Album) was featured. But there was a slight difference from the original album cover; if you looked closely at Scott's shirt, the text had been changed from "DEATH DEFYIN'" to say "DEVASTATING" (see first picture in gallery. Click to see larger version.).

Albumsix forums - Remember when Mikey started that fire? - where it all began