From Weezerpedia
(Redirected from Falling For You)
Jump to: navigation, search

"Falling for You" was written in spring of 1996, while Rivers Cuomo was attending Harvard, toward the end of the recording cycle for Pinkerton. Working lyric sheets for the song appear in The Pinkerton Diaries dated April 14 and May 23. The song was likely the penultimate song written for the album (before "Butterfly"). Like many other songs written by Cuomo at Harvard, no solo demos are known to have been recorded beforehand; Cuomo brought the song to the band and developed it in the studio.[1] Brian Bell would remark in 2022 regarding a rehearsal of "Falling for You" that Pinkerton made such extensive use of tremolo picking that the band thereafter referred to the technique as "butterfly picking/strumming," and that he uses special picks for such occasions to this day.[2]

In the song's lyrics, Cuomo refers to himself as "little old 3-chord me" ironically. In fact, "Falling for You" is one of the most musically complex songs in the Weezer discography, utilizing every root note on the guitar fretboard and employing numerous chord progressions and key changes. The song was not performed live after 1997 until 2002, when the song was selected at random[3] for a concert in Tokyo (a performance which later appeared on the EP The Lion and the Witch), leading Cuomo to quip "I'd like to ask for the Lord's help in guiding us through the performance of this next song. Please, God!"

The previous track, "Pink Triangle", transitions seamlessly into "Falling for You" (the first Weezer song to do so). At the beginning of the track, a woman's voice can be heard saying, in Korean, "어는 회사작품이지요" ("What company makes this product?"). During the recording sessions, Rivers' amplifier was receiving radio interference, of what sounded like a woman speaking an Asian language. Considering the themes of the album, Rivers felt it was divine intervention, and left the intrusion on the master tape as a happy accident, rather than re-record or edit the recording [citation needed].

The song (as it appears on the album) was included on the 1996 Geffen Records sampler Swagalicious!. 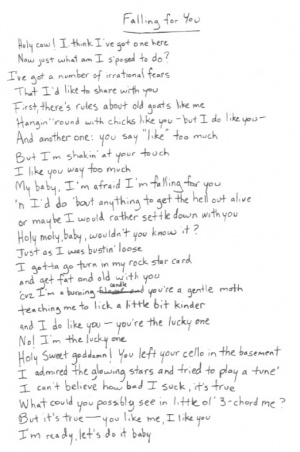 Holy cow! I think I've got one here
Now just what am I supposed to do?
I've got a number of irrational fears
That I'd like to share with you
First, there's rules about old goats like me
Hangin' around with chicks like you
—But I do like you— and another one:
You say "like" too much

But I'm shakin' at your touch
I like you way too much
My baby, I'm afraid I'm falling for you
I'd do 'bout anything to get the hell out alive
Or maybe I would rather settle down with you

Holy moly, baby, wouldn't you know it?
Just as I was bustin' loose
I gotta go turn in my rock star card
And get fat and old with you
'Cuz I'm a burning candle, you're a gentle moth
Teaching me to lick a little bit kinder
And I do like you — you're the lucky one
No! I'm the lucky one

I'm shakin' at your touch
I like you way too much
My baby, I'm afraid I'm falling for you
I'd do 'bout anything to get the hell out alive
Or maybe I would rather settle down with you

Holy sweet goddamn! You left your cello in the basement
I admired the glowing stars and tried to play a tune
I can't believe how bad I suck, it's true
What could you possibly see in little old 3-chord me?
But I do like you and you like me too
I'm ready, let's do it baby

I'm shakin' at your touch
I like you way too much
My baby, I'm afraid I'm falling for you
I'd do 'bout anything to get the hell out alive
Or maybe I would rather settle down with you