This page is for the musician. For the self-titled album, see Matt Sharp (album).

Matt Sharp (born September 22, 1969 in Bangkok, Thailand) is a American bassist and songwriter. He is best known as a founding member and former bassist of Weezer. Sharp left the band in February 1998 in order to focus on his own band The Rentals. In addition to his work with Weezer and The Rentals, he has also released one EP and one full length album as a solo artist. 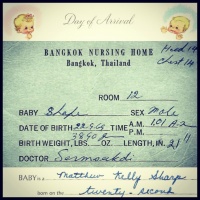 Matt Sharp was born in Bangkok, Thailand to American parents on September 22, 1969, during the Vietnam War. His father, Richard Gene Sharp, was employed by a company contracted by the United States government to interview prisoners of war[1]. When Matt was one year old, he and his family moved to Arlington, Virginia. At age fourteen, Sharp began listening to punk rock music like Suicidal Tendencies. He then decided that Arlington and its music scene was too boring for him and decided to move west to California. At age sixteen, he arrived in San Diego. In 1989, Sharp fronted a short-lived "goth" band called the Clique, described by Karl Koch as having a "somewhat pretentious Cure/Joy Division style" [2]. The band produced a single demo tape that included one song, titled "Ice Butterfly".

Months later, he met Patrick Wilson, future Weezer drummer. Wilson convinced Sharp to move into an apartment with Rivers Cuomo. Sharp occasionally played keyboards for the band Bush (which was comprised of Wilson, Pat Finn, and Tom Gardocki. Later, after moving to his own apartment in Westwood, Sharp became involved with the social activism group the Black Rock Coalition. Throughout 1990, Sharp and Wilson collaborated on various songs, described by Koch as "funny" and "They Might Be Giants-like" 4-track recordings [3].

In early 1992, Wilson showed Sharp material from his (Wilson's) and Cuomo's "50 Song Project". Sharp liked the material and moved back down to Los Angeles and joined the project that would become Weezer. Sharp moved into the "Amherst House" on March 19, 1992. In May of 1993, Sharp wrote a song titled Mrs. Young, collaborating on a demo with Cuomo. Initially considered for an independent Weezer single along with Jamie, the song eventually formed the basis for the Rentals track Please Let That Be You. Sharp continued working on refining a small number of demos throughout the rest of 1993, including "Friends of P", "California", and "Stupid Girl".

The Rentals & exit from Weezer

After the release of Weezer's first self titled release in 1994, Sharp formed a side-project in which he was both the chief songwriter and lead-singer. Initially dubbed "That's Incredible!" by producer Tom Grimley, Sharp would eventually settle on the name "the Rentals". Said Sharp in a 2015 interview with the San Diego Reader: "I wanted to find a name that sounded like it could be a band from any era," [4]. Sharp recorded demo tapes for two potential albums at Poop Alley Studios: Return of the Rentals and For the Ladies. The Rentals released their first album, Return of the Rentals, later that year. The band had a radio hit with the single "Friends of P."

Sharp began production on The Rentals' second album beginning in Spring of 1996, traveling to London multiple times over the next two years. Sharp was substituted with Scott Riebling for the final Pinkerton sessions. Sharp left Weezer officially in 1998 - apparently a mutual and amicable decision between himself and the band - in order to focus on The Rentals. Sharp played with Weezer for the final time on August 15, 1997 at a benefit concert for Mykel and Carli Allan. His final collaboration with Rivers Cuomo would be the Homie song "American Girls", released in early 1998 for the Meet the Deedles Soundtrack. The Rentals released their sophomore album Seven More Minutes in 1999. However, the album sold less than Return of the Rentals and the band subsequently went on hiatus.

On April 18, 2002, Sharp filed a lawsuit against his former Weezer bandmates for breach of fiduciary duty, legal malpractice, and dissolution of partnership, declaratory relief and accounting under the copyright act. [5] Sharp claimed that he had co-written "Undone - The Sweater Song" and nine of the songs from Pinkerton, and was entitled to one-third interest in the songs. Sharp also claimed in the suit that he had planned on appearing in the band's music video for "Island in the Sun" following the departure of Mikey Welsh, and that he was consulted about songs that appeared on the band's self-titled third album [6]. Said Sharp about the lawsuit to MTV: "I found out some things recently about their actions that really changed the whole thing and, all in all, really broke my heart. They left me no choice than to have to deal with it this way" [7]. The lawsuit was settled out of court [8].

Wanting to "disconnect and cut all ties to the music world" [9], Sharp moved to a small house at 4212 Old Hillsboro Road in the small town of Leiper's Fork, Tennessee. After nearly four years of no musical output, Sharp released a solo, acoustic EP in 2003 called Puckett's Versus the Country Boy, named for Puckett's, the town's sole restaurant and grocery store. Sharp followed up the release with a full-length self-titled album in 2004.

In February of 2004, Sharp was joined by Weezer frontman Rivers Cuomo at a show at California State University, Fullerton. The duo played two Weezer songs, "Say It Ain't So" and "Undone", and an old demo, "Mrs. Young". Sharp alluded to a potential collaborative record, and the two performed "one of the first ideas [they] started working on together", a song titled "Time Song". The project, however, was eventually abandoned. Said Sharp in a letter to fans the following August, "we went through 15 or 16 new song ideas, some good, some not so good, but i'm sure there were a few things in there we could have been proud of. unfortunately our own special brand of disfunctionality may keep us from giving this collabaration the proper attention anytime soon."

Reformation of the Rentals

In 2005, Sharp reformed the Rentals six years after the release of Seven More Minutes. The band toured throughout 2006 and 2007, releasing The Last Little Life EP in 2007. In early 2009, the band a new multimedia project titled Songs About Time, consisting of three mini albums, a daily photo diary, and videos released weekly.

This discography lists only The Rentals' albums. For more detail, please see the entry for The Rentals

With Tegan and Sara