Say It Ain't So

"Say It Ain't So" is the third single and seventh track from The Blue Album.

Rivers Cuomo recorded multiple demos of "Say It Ain't So" in the first half of 1992, according to the Recording History. The inspiration for the song's lyrics came from an experience as a teenager, in which Cuomo found beer in the refrigerator. Cuomo had been afraid that his stepfather, Stephen Kitts, would leave the family, mistakenly believing that alcoholism had contributed to the dissolution of the relationship between his mother and biological father.

Rivers Cuomo only saw his father a few times between the time his father walked out on the family and 1995, when they reconciled. Cuomo told Rolling Stone in 2014, "I was an angry young man[...] Typical Generation X. I was quick to point the finger."[1]

One of Cuomo's original 1992 demos for "Say It Ain't So" was released on November 22, 2020 as part of the digital compilation Alone IV: The Blue-Pinkerton Years. The demo had been leaked weeks earlier through the demo storefront on riverscuomo.com. This early version of the song contains what would comprise only the initial verses and first chorus of the final song.

A demo of "Say It Ain't So" was also recorded in 1992 as a full band for the band's second demo tape (commonly known as The Kitchen Tape). Most copies of the Kitchen Tape that were produced lacked "Say It Ain't So", however (in addition to a demo of "The World Has Turned and Left Me Here"), and the demo was not included as part of the deluxe reissue of the Blue Album in 2004. In June of 2016, a copy of the complete Kitchen Tape (given by Cuomo to engineer Paul duGre under the title Opposite Sides of the Same Good Ol' Fence) was listed on eBay. Members of the AllThingsWeezer forums crowd-sourced funds to procure the tape for $4,350, whereupon the tape was digitized by user Geewiz and distributed online.

Another demo of the song was also recorded in 1992 as part of the band's third demo (commonly referred to as "The Real Demo"). This tape, engineered by Jon Pikus and mastered by Alan Yoshida, was distributed at the time in the band's aggressive campaign to be signed to a record label. Copies of the tape were obtained by fans in the late 90's and low-quality rips were circulated. A higher-quality digitization was produced by a fan who procured the tape in the early 2000s, who thereafter distributed it among fans.

"Say It Ain't So" was also released on July 13, 1995 as a radio single, making it the final single released from The Blue Album. It reached #23 on The New Zealand show U Choose 40 Sing-A-Long Classics [citation needed].

The song was featured as a playable song in the 2007 rhythm video game Rock Band. The game has since been available in other rhythm video games, such as Guitar Hero Live and Rocksmith 2014.

Musically, "Say It Ain't So" features a reggae-ish beat under the verse vocals, which are doubled by bassist Matt Sharp in falsetto. When the chorus kicks in, a big, start-stop guitar riff mimicks the beat, and for the second and third choruses, a brief unison bend guitar part fills the spaces between the main riff. The guitar solo features a layered sound, much in the style of Queen guitarist Brian May, whom Rivers had expressed an affinity for.

For the studio version, Cuomo double tracked Chorus vocals and left the verse vocals with one take. It is one of the songs on the debut album to not feature Brian Bell on vocals. Originally, the words "Heartbreaker, lifetaker" were echoed at the end.

The chord progression for the verses and chorus of the song is the following: vi, V/vi, IV, I.

The artwork for the "Say It Ain't So" single comes from a childhood drawing Rivers made of him and his father playing soccer--something they mutually loved. Prominently featured in the artwork is the image of Rivers scoring a goal (spelled "goll"), and his father encouraging him on with lines like, "Yay, my son." Cuomo included the original drawing in the music video for the solo demo "Lover in the Snow" in 2008.

The release on 10" vinyl was a limited edition, with only 5000 numbered copies released.

All versions of the "Say It Ain't So" single feature the remixed version of the song (see below), and various editions contain one or both songs "No One Else" and "Jamie", recorded acoustically on April 1, 1995 at at Cat's Paw studios for Atlanta radio station WNNX, aka 99X. Bootlegs of all five songs recorded that day (including "Buddy Holly", "In the Garage", and "Undone") can be found online.

There are two mixes of the song. The original mix, featured on initital pressings of The Blue Album, can be distinguished in that the feedback in the chorus of the song has been edited out. However, when released as a single, the recording was remixed, with all instruments being placed slightly different in the mix and the guitar feedback between chords being intact.

"Say It Ain't So" is one of the most beloved Weezer songs. Many Weezer fans, and even Weezer band members, have cited it as their favorite Weezer song. Band member Brian Bell has expressed before that it is his favorite Weezer song. In 2008, the song was ranked #72 on Rolling Stone's "The 100 Greatest Guitar Songs of All Time." It is also one of the band's more visible songs among casual music fans and the general public. Allmusic.com gave "Say It Ain't So" a 5 star rating and named it an "AMG Track Pick."

The band wanted something a bit more grounded and serious after the pop culture explosion of "Buddy Holly," and Sophie responded with the touch needed to capture the band in their original rehearsal "garage" in West L.A. Unfortunately, they couldn't play hackey-sack to save their lives that day!

-Karl Koch on the "Say It Ain't So" music video, from the liner notes for Video Capture Device

The music video was directed by Sophie Muller. Scott Shriner expressed on the Video Capture Device commentary that the video caught his eye because it was different from what was around at the time. The video shows the band in the wake of their success playing in their old garage at their old house. The video also features band friend, historian and unofficial fifth member Karl Koch. During the guitar solo, the band is shown playing hacky sack in their backyard. 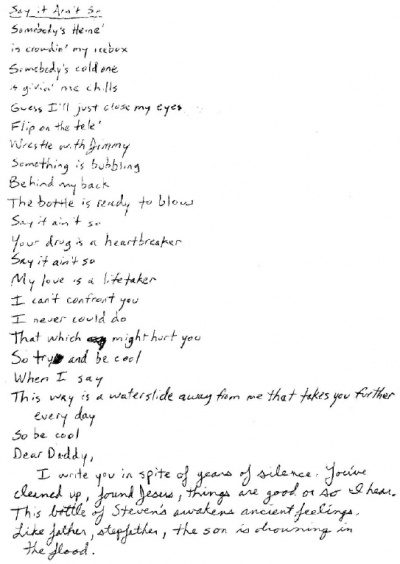 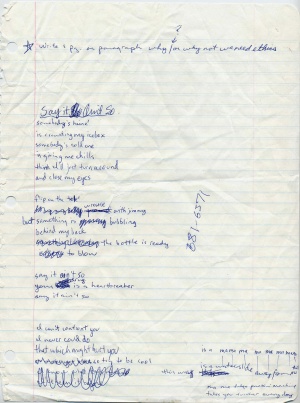 Dear Daddy,
I write you in spite of years of silence
You've cleaned up, found Jesus
Things are good or so I hear
This bottle of Steven's
Awakens ancient feelings
Like father, stepfather, the son is drowning in the flood
Yeah, yeah yeah, yeah yeah