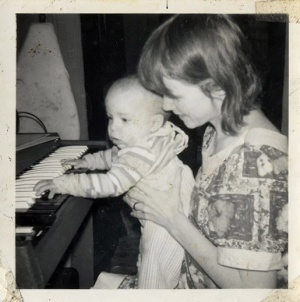 Beverly Shoenberger (born May 8, 1947) [1]is the mother of Rivers and Leaves Cuomo. Her father was a German-American while her mother is of English descent.

Beverly's life with Rivers, Leaves and Frank mostly revolved around the Zen Center in upstate New York. After Frank left the family, Beverly took her two sons and went to Yogaville, which was run by Sri Swami Satchidananda. Here, Beverly met Stephen Kitts, whom she later fell in love with and married. Both worked as massage therapists.

When Yogaville moved in the 1980s, Beverly and Stephen chose to remain in Connecticut and relocated to Storrs Mansfield. In the summer of 1983, the Kitts purchased a home on South Eagleville. There, Beverly and Stephen founded "The Connecticut Center for Massage Therapy". Beverly soon met Mary Pat Fisher, the mother of Justin Fisher. The two found they had much in common and arranged for their children to play together frequently.
Retrieved from "https://www.weezerpedia.com/w/index.php?title=Beverly_Shoenberger&oldid=65814"
Categories: