Rivers Cuomo wrote "No One Else" about a former girlfriend named Petra.[2] The song is first known to have been demoed to 8-track by Cuomo in August of 1992.[3] It was attempted by Weezer the same month during the sessions for Weezer's second demo (The "Kitchen Tape"), but remained unfinished. The song was first played live on September 15, 1992 at a show at Coconut Teaszer in Los Angeles. In describing the show, Karl Koch noted that the song "started to steer the band in a previously invisible direction."[3] "No One Else" is notable for being the only track on The Blue Album played in standard tuning; all other tracks were recorded a half-step down.

"No One Else" is often considered a fan favorite. Todd Sullivan listed it as one of the songs that caused him to take notice of Weezer. [citation needed] During a number of live shows in the summer of 2000, Weezer modified "No One Else" and "Buddy Holly" by adding an extended instrumental introduction. The band kept the introduction for Buddy Holly as a part of the performance until 2005, but dropped the introduction to "No One Else" after only a few shows.

A live, acoustic rendition of the song was recorded by the band on April 1, 1995 at Cat's Paw Studios for Atlanta radio station WNNX. This recording was made available as a b-side to the single release of "Say It Ain't So", and was later made available as part of the compilation Dusty Gems & Raw Nuggets, initially released as part of the deluxe edition of The Blue Album. Additional notable live renditions include a studio recording for the show BBC Evening Sessions at the BBC Radio 1 Studios in London, as well as a live performance for the French radio series The Black Sessions recorded on February 21, 1995.

The full-band demo of "No One Else", recorded for the band's third demo, was shared by fans in the late 90's, before a copy was procured and ripped in higher quality by a fan in the early 2000s. 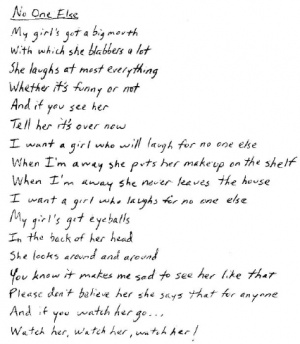 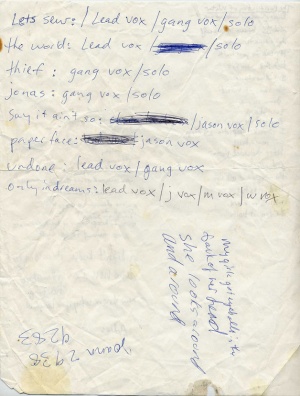 My girl's got eyeballs
In the back of her head
She looks around and around
You know it makes me sad to see her like that
Please don't believe her
She says that for anyone
And if you see her tell her it's a hey, hey hey hey!