According to the Recording History, the guitar riff for "El Scorcho" was originally written as the intro to an 8-track demo by Rivers Cuomo around the spring of 1992 titled "Simply State (and the Girl Will Follow)". A similar riff was also used as the outro to the demo "Blast Off!". While attending Harvard in December of 1995, Cuomo composed a piece of music as a homework assignment for his Music 154 course. This piece would form the basis for the chorus melody of "El Scorcho". "El Scorcho" was one of the first songs written by Cuomo (following "Pink Triangle") to be written while Cuomo was attending Harvard and began moving away from the Songs from the Black Hole album concept. The title "El Scorcho" was inspired by the sauce "Del Scorcho" from the fast food chain Del Taco [citation needed] .

Brian Bell is the one who says "El Scorcho" and "rock and roll!" at the beginning of the song. Bell's first lead vocal on a Weezer record can also be found on the song during the bridge ("How stupid is it, won't you give me a minute? Just come up to be and say hello to my heart.") Bell was also responsible for the guitar solo, according to a 2002 fan interview with Cuomo. The song also mentions the band Green Day in the lyric "I asked you to go to the Green Day concert/You said you never heard of them." When performing the song live, Rivers Cuomo has often substituted in other bands when singing the lyric, such as "I asked you go to the Foo Fighters concert" when touring with the band on the Foozer tour.

Whatever weirdness that led to the band's version being the 'MTV cut' has long since been forgotten, and everyone now concludes that Mark's cut is 'The One.' The video was hot in Downtown L.A. at some sort of old ballroom.

-Karl Koch on the "El Scorcho" music video, from the liner notes for Video Capture Device 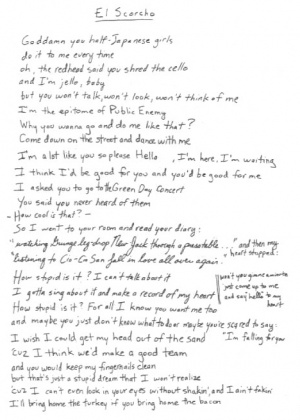