From Weezerpedia
(Redirected from Amherst House)
Jump to: navigation, search 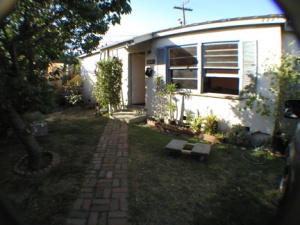 The Amherst House (2226 Amherst Avenue, Los Angeles) was the home of the Weezer members before their formation and well after their first album.

Matt Sharp and Rivers Cuomo moved into the Amherst House on March 19, 1992, which also marks the first time that Weezer ever played a show (at the Raji's on Hollywood Boulevard). Before that, the band was operating out of 1711 Stoner Avenue in Los Angeles. Before moving into the Amherst House and playing as Weezer, the Stoner Ave crew was constantly switching around this member with that member to form bands such as The Truth, The Dum Dums, United Dirt, Fuzz, 60 Wrong Sausages and Bush.

On March 19, 1992, Cuomo, Sharp (fresh from Berkeley) and Justin Fisher moved into the Amherst house. They convinced the landlords that they were UCLA film students and therefore would make a lot of noise. On that day, Weezer's first show suddenly fell into their laps. Before the show, Weezer began brainstorming various names for their unnamed band. Early suggestions for band names included, "The Big Jones" and "This Niblet". Additionally, the names "Meathead", "Outhouse", "Hummingbird" and other random names are written on early Weezer demo tapes.

Early band rehearsals and recordings took place at Amherst from now on. Members began to gravitate to the garage for recording, which was situated next to the kitchen. The first documentation of demo recording at Amherst is one by Patrick Wilson. The first documented rehearsal took place in April, 1992. Songs played were: "Only in Dreams," "Why Can't You Be There," "My Name Is Jonas," "Only She Can Hold My Hand," "Paperbag in the Back Seat," "Let's Sew Our Pants Together."

Sometime in May 1992, the band recorded their first demo in the garage. This demo featured "Thief, You've Taken All That Was Me," "Let's Sew Our Pants Together," and "The World Has Turned and Left Me Here."

The band plays in Northern California, at The Power Station in Eureka

On August 1st 1992, the band recorded their second demo tape, The Kitchen Tape, utilizing the house's kitchen as a studio room, using the reflective surfaces to try and get a brighter room sound for the drums and some other instruments. It is considered to be Weezer's first "proper" album. Two weeks later, the band left the Amherst house to begin their first Do-It-Yourself (DIYS) tour in Northern California.

Nearly a year later, on June 25, 1993, Weezer signed to Geffen Records. In early August, the day before the band departed for New York City to start recording what would become the Blue Album, they threw a huge party at the Amherst house (this was not the first nor the last such party, but it was the biggest and the craziest). When Geffen A&R rep Todd Sullivan's assistant Denise MacDonald arrived the next morning to fly the band out to New York, she found several passed out party-goers on the lawn and throughout the house. Also, during the night, the only toilet in the house was smashed. 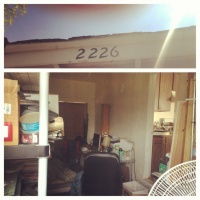 The Amherst House is considered by fans to be one of the most important (if not the most important) place(s) in Weezer history. It is featured prominently in the "Say It Ain't So" music video, which shows extensive shots of the garage, the kitchen and the backyard. During the Video Capture Device commentary, Karl Koch gives extensive directions on how to find the house.

The house continued to serve as a "band house" after members of weezer no longer lived there, serving as a rehearsal space for Shufflepuck, Psoma, and several other bands up untill the mid 2000's.

Around 2005 the current residents of the house were told they had to move out, as the interior of the house was to get a complete renovation. This spelled the end of The Garage as it was known. One final blow out party was organized by Justin Fisher, who had moved out years earlier when he got married but still had close connections to its current residents who were being evicted. At the party, Weezer fans cut off pieces of the famous, ugly, ineffective soundproofing used carpeting that had lined the walls and ceiling of the Garage for nearly 15 years, to keep as mementos.

In 2008, Weezer drove around Los Angeles with their friend from these early years, Jackass' Johnny Knoxville to promote their new album. While driving around, the band returned back to the Amherst house and discussed some of its history. The exterior was unchanged but they did not go inside, so the fate of the houses and garages interior remains cloudy.

It was announced on November 19, 2020 that the house is scheduled to be demolished.