This page is for the song. For the tribute album, see Friends of P - Tribute to the Rentals

"Friends of P." is the third track and first single from the Rentals' 1995 debut, Return of the Rentals.

"Friends of P." is the Rentals' most successful single, peaking at number 7 on Billboard's Modern Rock Tracks chart. Multiple versions of "Friends of P." exist. One version, Matt Sharp's 4-track demo, can be found on a promo single, and another demo version appeared on the 2001 fan club-exclusive release Excellent Stocking Stuffer.

When the song was initially released, the band was constantly questioned as to who the "P" was that the song referenced in it's title lyric. Matt Sharp finally admitted in an interview that "P" was a reference to Paulina Porizkova, the wife of Weezer's producer for The Blue Album, Ric Ocasek. The album art for the "Friends of P." single shows both Patrick Wilson and Petra Haden without their heads. Karl Koch explained: "Geffen did not allow its recording artists Patrick Wilson and Petra Haden's faces on the artwork, so Matt had their heads photoshopped away. This rather haunting image also appeared on large promo posters!"

In 2008, the band Tokyo Police Club covered this song on a digital-only Rentals tribute EP, Friends of P - Tribute to the Rentals (released in Japan as Lost Out in the Machinery: The Songs of The Rentals) and on the final date as the opening artists on Weezer's Troublemaker Tour. The band Ozma covered "Friends of P." (along with "Getting By" and "Waiting") accompanied by Matt Sharp at a concert in Pomona, CA on November 26, 2011. The band covered the song again in 2012 during a concert on the Weezer Cruise.

"Friends of P."'s music video was responsible for the bulk of the song's exposure. According to Matt Sharp, the video was filmed at Park La Brea Apartments in Los Angeles by Sharp's childhood friend Charles Hamilton[1] on Rod Cervera's black-and-white 16mm camera on a budget of less than $500[2][3]. The video portrays the band as vaguely Eastern-European setting, with the song's lyrics subtitled in Russian. Initially deemed "unsalvageable" due to falling out-of-sync with the music, the footage was later edited together by film student Jason Ruscio. Petra Haden reportedly suffered headaches during filming due to the thick prescription glasses worn during filming. A still from the video shoot was used for the Return of the Rentals album cover. A blog post on the official Rentals website explained the music video's aesthetic direction in December of 2005:

The look and concept of this stark minimalist video simply started as a loopy late night inside joke between Tom and Matt. At a late night recording session, the two friends came up with a silly back story about an all but forgotten new wave band called "The Rentals", a group from the late nineteen seventies that had long been lost behind the walls of the iron curtain. The storyline was thoroughly detailed with a plot line that included members of the group working with the underground movement during the cold war. The plot went on to include guitarist Rod Cervera being caught with a batch of micro film which promptly landed him in a local garrison for his anti-communist behavior. And this, of course, left The Rentals to be put on an indefinite hiatus.

Enter out of work actor named Ronald Reagan, Margaret Thatcher and the end of communism on the eastern block.

Sometime later just after fall of the iron curtain, somewhere in the early nineties during a late night after party on her "Blonde Ambition Tour", Madonna re-discovered The Rentals in a run down Czechoslovakian disco and promptly signed them to her brand new label "Maverick Records". 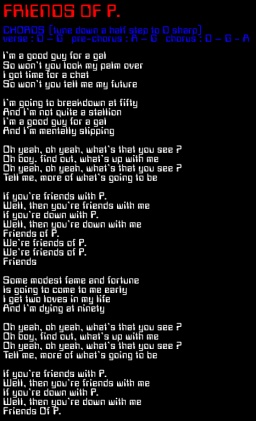