The untitled collaborative album by Rivers Cuomo and Matt Sharp is an unfinished project by the two musicians that has generated significant speculation and enthusiasm among Weezer fans. It was first alluded to by the pair at a Matt Sharp concert in 2004, but never came to fruition. The project was short-lived and very little of it has surfaced. 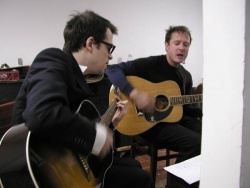 Though Weezer began in a more collaborative spirit, with Cuomo initially sharing songwriting duties with drummer Pat Wilson and original guitarist Jason Cropper, their signing to Geffen Records marked a general diminishing of the other band members' roles. Even amid this more ensemble-driven period for the group, however, Sharp did not receive writing credits on either of the two Weezer records he played on - Weezer (The Blue Album) and Pinkerton. Instead he has been described as filling an advisory role to Cuomo's artistic process, providing feedback on songs as Cuomo developed them. Publicly, Sharp sought out a lot of the roles that a traditional frontman would fill for a band: he introduced songs and engaged in significant banter during concerts, was vocal and assertive in interviews, and sometimes openly criticized Cuomo's documented tendency for making unilateral creative decisions.

Sharp left the band in 1998 under circumstances that haven't been made fully clear to the public. Despite this, he and Cuomo appeared to maintain a positive friendship and working relationship. While writing for his group's sophomore record Seven More Minutes, Sharp brought Cuomo a version of "My Head is in the Sun," which they collaborated on, seemingly fruitfully.

This relationship soured between then and 2002, however, when Sharp brought legal charges against his former bandmates. Sharp claimed he was entitled to one-third interest in a number of the band's songs, especially "Undone - The Sweater Song" and nine of the songs from Pinkerton. The suit was settled out of court.

This conflict was apparently resolved, however, and the pair found a new working relationship. According to a letter that Sharp wrote, the pair experienced "a quick and explosive creative period" in February of 2004. They purportedly worked on 15-16 "new song ideas" together. Aside from one title - "Time Song" - none of these have surfaced and no released or leaked songs from either songwriter have been linked to the abandoned project.

"Well Rivers and I have been talking about a lot of things lately, and one of those things is the thought that we may make a record together someday. This is one of the first ideas we started working on together, it's called "Time Song...""

Surprising many fans, Cuomo joined Sharp on stage on February 12, 2004 during a stop on Sharp's solo acoustic tour. The pair played four songs together: "Mrs. Young," "Time Song," "Say It Ain't So," and "Undone - The Sweater Song." "Mrs. Young" was the pair's first formal collaboration, beginning as a Sharp-penned 1993 demo originally written for Weezer. Cuomo assisted with the song's arrangement and the band considered releasing it as a b-side, but it never saw the light of day. "Time Song" is a Sharp outtake, presumably written alongside the rest of his solo songs, whose first-known live performance was October 23, 2003. This duet performance of the song featured a new bridge, which, fans assume, was written by Cuomo.

Karl Koch described the show as significantly positive for the two musicians' relationship, stating that it "came off well and delighted the audience, and marked a public end of the estrangement that had persisted between the two former bandmates for several years. With the legal (and emotional) issues cleared up, the two have gotten back in touch as friends and are now keeping in touch and sharing music, separately from their individual works in Weezer and Matt Sharp solo. Once in a while, hell does freeze over."

"Unfortunately our own special brand of disfunctionality may keep us from giving this collabaration [sic] the proper attention anytime soon."

Little is known about the circumstances that led to Cuomo and Sharp discontinuing this effort at putting a record together. To date, Cuomo does not appear to have commented on it publicly. It seems at least possible that Sharp's announcement of a potential album was premature.

Of all the songs known to be worked on by Sharp and Cuomo, "Time Song" is the most likely to have been considered for the record, as it was a recent composition that the two choose to showcase at the Fullerton performance. Though they performed "Mrs. Young," it seems unlikely that they would release a new version of the song given the fact that it had already seen proper release as the re-worked "Please Let That Be You." According to the Weezer Recording History, "Safe Harbor" and "Colossal" were recorded by Cuomo and Sharp in December of 2003, meaning they would have been worked on several months before the duo began collaborating more seriously in February of the following year. "Monica Smile," "No Desire," "She'll Do," "Silence and Light," and "January's Girl" were all performed by Sharp during his various solo tours, but never saw formal release. It's possible he brought those songs to the sessions with Cuomo, as he also performed "Time Song" at a solo show alone prior to working on it with Cuomo. "Sometimes I'm Lost Without You" is a Cuomo-Sharp collaboration that was only brought to light when added to the BMI Repertoire. Its BMI Work number suggests it was written in 2007, three years after the two were working together.