"Butterfly" is the tenth and final track on Pinkerton.

"Butterfly" alludes to the Puccini opera Madama Butterfly. The opera concludes when the primary character, Cio-Cio-san, upon realizing that B.F. Pinkerton will not return for her, decides to die with honor rather than live in shame, and commits suicide with a knife, dying just as Pinkerton arrives. In the Weezer song, Rivers Cuomo sings about his regret upon catching a butterfly in a jar only to find her withered away when he wakes the next day. The album recording consists solely of Cuomo on vocals and acoustic guitar, with light percussion by Karl Koch. Engineer Dave Fridmann spoke about the song's production in 2011 [1]:

Rivers, he kept telling me this whole time, the whole time we were recording, "I've got this other song but we're just gonna wait 'til the time is right" and, apparently, the right time was 4:00 AM on the last night. He finished the first take and that was the first I'd heard it and I just got on the talkback and said "You sure you wanna say that to people?" and he was like "Yeah, I'm sure." and I'm like "OK, good". I was like, that's amazing, but I can't believe you're being this honest and open and unguarded in life, let alone on a record that's about to go out.

According to a Alternative Press interview with Matt Sharp in 2006, Cuomo brought the song to Sharp and asked for his opinions. Even though the recording included only Cuomo and Koch, Sharp still felt it was "essential to be on the record."

"Butterfly" was sparingly played live with electric guitars in the years following Pinkerton's release. The live recording of "Butterfly" released as a b-side to the retail Beverly Hills singles was recorded at DTE Energy Center in Detroit, Michigan on July 12, 2002 and features the entire band, with a prominent bass line played by Scott Shriner. Versions like this are often referred to by fans as "electric" Butterfly. On Cuomo's live album Not Alone: Rivers Cuomo & Friends Live at Fingerprints, the song was performed by a banjoist. In Weezer's 2009 AOL Sessions, Cuomo performed the song with harpist Allison Allport. Weezer performed the song acoustically in concert, with only Cuomo and Koch, during the Memories Tour beginning in 2010.

Butterfly is upheld as a classic by Weezer fans, with some fans claiming it is Cuomo's lyrical best. Although the original Rolling Stone review for Pinkerton is typically looked down upon by fans, many would tend to agree with author Rob O' Connor's words on "Butterfly." After criticizing almost every other track, O'Connor says: "Butterfly" is a real treat, a gentle acoustic number that recalls the vintage, heartbreaking beauty of Big Star. Cuomo's voice cracks as he unintentionally bludgeons the fragile creature in the lyric, suggesting that underneath the geeky teenager pose is an artist well on his way to maturity. This raw emotion is one of the facets of Cuomo's early song writing that many fans have longed for since the post-Pinkerton hiatus. Teenage Victory Songs, a Weezer SongBlog, marked "Butterfly" as among Weezer's "Very Best," wondering if it indeed isn't Cuomo's single greatest song. 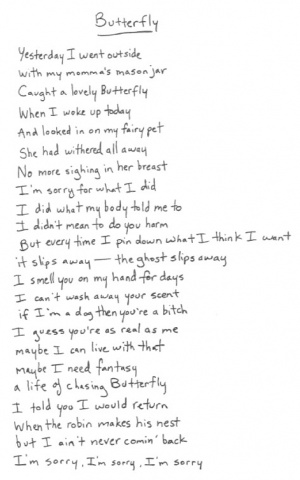