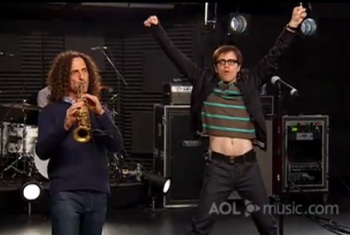 Rivers Cuomo flashing some skin while performing "I'm Your Daddy" with Kenny G.

In keeping with the spirit of collaboration that Rivers Cuomo seemed to be in before and during the release of Raditude, each of the five songs recorded featured a guest performer.

Rivers changed outfits for each performance. Notably, each of the outfits had been worn during other recent promotional appearances.

Two of the sessions' tracks, "I'm Your Daddy" and "Brain Stew", were released on the 2010 EP ...Happy Record Store Day!. A different, acoustic duet version of "I Want You To", recorded elsewhere, was also released on the EP. Also, this version of "Butterfly" was released as a part of a digital-download charity compilation in early 2010.