Raditude is the seventh studio album by Weezer, released on November 3, 2009. The title of the album was suggested by Rainn Wilson, while the cover photo was the winner of a National Geographic reader-submitted photo contest. Some of the songs on the album are collaborations with other professional songwriters.

According to Karl's Corner - 05/26/2009 the first recording sessions for Raditude began in November 2008, a week after the Troublemaker Tour concluded, and lasted until January 2009. They were produced by Jacknife Lee in Malibu, Santa Monica, and West L.A. Lee had previously handled production duties on the songs "Troublemaker" and "Pork and Beans" on The Red Album. The songs from these sessions were mixed in New York in March 2009 with Rich Costey. However, Rivers had written some more songs that he was keen to record for Album Seven. These songs were recorded in the summer of 2009 with Butch Walker.

Cuomo stated in an interview that he will try again in submitting songs that appear on Alone II for Weezer albums, and that they may appear on Raditude. The songs "Can't Stop Partying", "I Don't Want To Let You Go" and "The Prettiest Girl in the Whole Wide World" eventually ended up being on the album.

Rumors again sprang up in early 2009 as pics and videos surfaced of Cuomo in the studio with Jacknife Lee. An Albumsix boardie ran into bassist Scott Shriner outside of a coffee shop. Scott confirmed that a new album was finished, but had yet to be mixed. Cuomo himself also confirmed that a new Weezer album would be this year saying that the band "is working on something big you'll want to get your hands on", but that he could not comment further.

Pat Wilson mixing.
On March 2, 2009 Patrick Wilson posted the message: "i'm mixing a song" on his Twitter page. There was no indication on if he was mixing a song from Weezer's forthcoming album although a picture posted on Karl's Corner on March 27, showing Pat sitting behind a mixing desk, seemed to confirm this assumption. The same post originally contained the information: "Weezer's 7th studio album has been recorded and is currently being mixed. There is no release date set at this time." but was removed minutes later for unknown reasons. 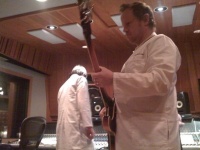 The band in the studio.

According to Cuomo, who spoke before a soccer match, the album is different from anything else they have previously done. When questioned further he said he could not talk about it.

When speaking of the album, Karl Koch said that unlike The Red Album, he was heavily involved with the album's creation process.

During a KROQ interview in May, Brian stated the album was set to be released in summer of 2009. Pat also noted that a song called "In the Mall" would be on the album, which was later discovered to be written by him.

During a second KROQ interview at the same time, Scott was quoted that songs for the next album were "still being worked on" and joked around with an official album title as "The Album 7". He also said that they have plans with iTunes (it is unsure if they are related to the album or not). Pat also stated that there is a fully acoustic song on the album with just guitar and vocals.

On May 20, 2009, an Albumsix user claimed that a source revealed to him that the album would most likely be released in August or September of 2009. Said user also claimed the album was written largely through collaboration, as previously speculated. Other rumors include that Pat has taken over Rivers' guitar duties, with Josh Freese replacing Pat on the drums. The boardie also confirmed that "Can't Stop Partying" was on the album and that the label was having difficulty selecting a single. None of this was officially confirmed at the time.

When asked for comments on the new album, Weezer said they would rather talk about their upcoming tour with blink-182.

During two shows in Asia in late July, Weezer played two new songs "The Girl Got Hot", "I'm Your Daddy", and a slightly reworked version of "Can't Stop Partying". During the show in Korea, Rivers announced the new album would be out in October. Following these shows, Karl posted pictures of the band finishing up material and practicing two new songs before the recording session was to be finished. As of early August, recording for the album was finished and final mixing was underway.

On August 12, Karl confirmed that the new to-be titled album was due out October 27 and a day later announced that the first single would be entitled "(If You're Wondering If I Want You To) I Want You To".

On August 16, "If You're Wondering..." was uploaded to Walmart's online store. Within an hour, the song was all over the internet. On August 18, in the early morning (and fifteen minutes after a fan requested the name), Karl Koch revealed the album was named Raditude. Koch confessed, "Personally, I hated it at first, then belatedly understood it wasn't trying to be 'serious' at all."

To promote the release of the album, Weezer collaborated with the company Allstar to create the Weezer Snuggie.

Rivers Cuomo discovered the album cover photo, which had appeared in the pages of a National Geographic, in an email. The magazine sponsors a reader-submitted photo contest in each issue. Nominees are selected by a photo editor and then featured on the website for open voting.

A mid-2009, winning entry in particular caught Cuomo's eye: a shot of a dog named Sidney in mid-flight across a living room. Cuomo thought it would make the perfect cover for Raditude because to him it represented the feeling he gets when he performs live. When the band got in touch with the winning photographer, Jason Neely of Middletown, Conn., to seek his permission, not only did he give his blessing, he also revealed something surprising: according to him, "Sidney is a big Weezer fan."

As for every Weezer album, it is an album of firsts, for Raditude, it is the first album to feature co-writers that are not former or current members of the band itself. The album and subsequent tours/promotional appearances were heavy with outside collaborations and appearances from already established songwriters and artists. There are a series of unused songs from this period and collaborations seem to be continuing despite the album being released, hinting that a potential follow-up album will feature more of these songs.