Josh Freese (born December 25, 1972) is an American session drummer and multi-instrumentalist. He is a permanent member of rock bands The Vandals and Devo. He has previously worked as a drummer for Guns N' Roses, A Perfect Circle, and Nine Inch Nails, among others. From 2009 to 2011, he was a touring drummer for Weezer. He is the brother of musician Jason Freese. 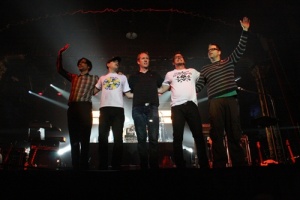 Freese, shown in the center, with the band on the Bleezer Tour.
In 2000, Freese played drums for the short-lived band Fliptop, fronted by founding Weezer member Jason Cropper.

In September 2002, Freese was called in to fill in for Weezer drummer Pat Wilson during demo sessions at S.I.R. Studios for the band's planned eventual fifth album.

Freese played drums on several tracks from Weezer's 2009 album, Raditude, including "I'm Your Daddy", "The Girl Got Hot," and "Let It All Hang Out." He also played drums on the band's covers of "Brain Stew" by Green Day and "Paranoid Android by Radiohead.

Beginning with the Bleezer Tour in 2009, Freese joined Weezer as a touring drummer, permitting lead vocalist Rivers Cuomo to focus on singing, and Weezer drummer Pat Wilson to fill in on guitar. Freese played with the band on subsequent tours, up through the Weezer Cruise in January of 2012.