"Punk Rock Girl" is a song by Rivers Cuomo written in March of 1993.

According to the Recording History, the song was written in tribute to the band that dog., who wrote a song of the same name. The song is included on Rivers' 1993 Monterey Jack cassette twice, once as a sped up snippet entitled "Punk Rock Snippet" and later on in the cassette, the full demo. The song was unheard by fans until November 22, 2020, when it was sold as part of the digital compilation Alone IV: The Blue-Pinkerton Years. 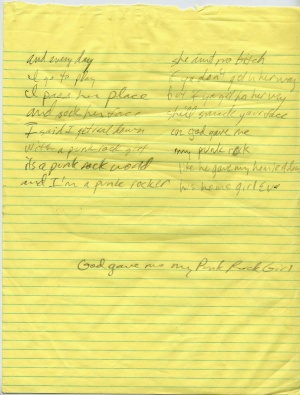