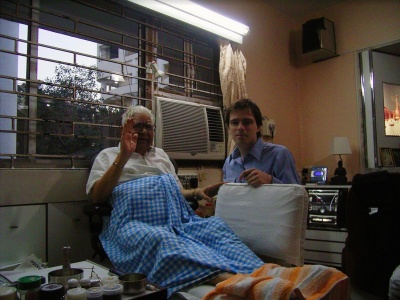 S.N. Goekna, one of the most prominent teachers and promulgators of Vipassana, with Rivers Cuomo in 2005.

Vipassana meditation is one of the world's most ancient techniques of meditation. The word comes from Sanskrit for "to see things as they really are." Vipassana has been taught - starting in India - for more than 2500 years ago as a universal remedy for universal ills, an "Art of Living." Rivers Cuomo practices Vipassana meditation roughly two hours every day.

Weezer frontman Rivers Cuomo, on the advice of producer Rick Rubin, became involved in Vipassana in February 2003, during the early stages of the making of Make Believe.

From an essay by Rivers Cuomo:

In the Pali language of the early Buddhist texts, vipassana means insight. It is often used to describe one of the two main categories of Buddhist meditation (the other being samatha or tranquillity). The term may correctly be applied to any Buddhist meditation technique that aims for a complete understanding of the Three Characteristics - dukkha (suffering or unsatisfactoriness), anicca (impermanence) and anatta (not-Self).