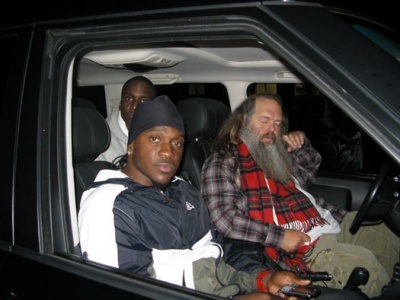 Rick Rubin napping at the wheel.

Rick Rubin is an American record producer, founder of Def Jam Records, and currently the co-head of Columbia Records. He is given credit for merging rap and heavy metal. His production credits span many different genres and include diverse artists such as the Beastie Boys, Slayer and Neil Diamond.

Rivers Cuomo sent the Album 5 Demos from Summer of 2002 to Rubin for his consideration. Rubin agreed to produce the next Weezer album and worked closely with the band, specifically Rivers, for the next three years. During this time, Rubin introduced Cuomo to Vipassana meditation and challenged Cuomo to write John Lennon-influenced songs and sincere songs with no irony. Rubin ended up producing Weezer's Make Believe in 2005 and five songs on Weezer (The Red Album) in 2008.