"Heart Songs" is the fourth track off of The Red Album.

"Heart Songs" is about all the artists and records that have influenced Rivers Cuomo, from Gordon Lightfoot's "The Wreck of the Edmund Fitzgerald" when Cuomo was 5 years old, to Nirvana's Nevermind in 1991. The bridge of the song briefly describes the formation of Weezer. From the liner notes for the deluxe edition of The Red Album:

Cuomo stated that Heart Songs was written in March, 2006 and demo'ed in August 2006. On his honeymoon in Japan in 2006, he had a sudden burst of inspiration. At 1 p.m. everyday he would get on his "crazy Japanese bike" and ride for about ten minutes down to the local mega-mall. On the third floor were studios that can be rented for five dollars an hour, with drums and a soundboard. Cuomo explained that he would record his new songs (which included "Heart Songs" and "My Day is Coming"), and when finished, exit "into the midst of a Japanese mega-mall".

To date, Weezer has not performed "Heart Songs" live. However, during the Troublemaker Tour, Karl Koch would come out on stage prior to the encore, set up a record player, and play "Heart Songs". Cuomo would then come out and smash the record player at the point of the song that recalls hearing Nirvana for the first time. Scott and Pat would then come on stage, and play Nirvana's "Sliver" as a three-piece. Cuomo has said that "Sliver" was the first Nirvana song he heard while working at Tower Records. In 2011, Cuomo appeared on the Chicago radio show Sound Opinions and performed "Heart Songs" as a mashup with "In the Garage", joined by the punk rock band The Cathy Santonies. 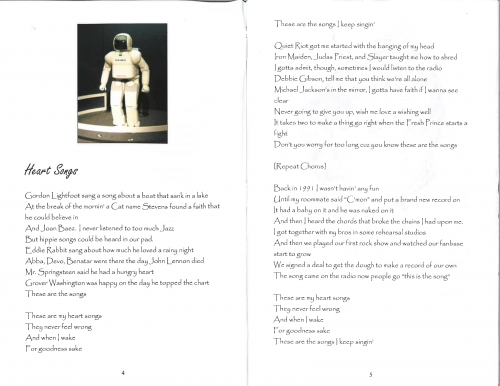 Gordon Lightfoot sang a song about a boat that sank in the lake
At the break of the mornin' a cat named Stevens found a faith he could believe in
And Joan Baez, I never listened to too much jazz
But hippie songs could be heard in our pad
Eddie Rabbitt sang about how much he loved a rainy night
Abba, Devo, Benatar were there the day John Lennon died
Mr. Springsteen said he had a hungry heart
Grover Washington was happy on the day he topped the chart

Quiet Riot got me started with the banging of my head
Iron Maiden, Judas Priest, and Slayer taught me how to shred
I gotta admit though, sometimes I would listen to the radio
Debbie Gibson, tell me that you think we're all alone
Michael Jackson's in the mirror, I gotta have faith if I wanna see clear
Never gonna give you up, this new love a wishing well
It takes two to make a thing go right, if the Fresh Prince starts a fight
Don't you worry for too long 'cause you know...

Back in 1991 I wasn't having any fun
'Til my roommate said "C'mon" and put a brand new record on
Had a baby on it, he was naked on it
then I heard the chords that broke the chains I had up on me
I got together with my bros at some rehearsal studios
then we played our first rock show and watched the fan base start to grow
We signed a deal to get the dough to make a record of our own
The songs come on the radio now people go "This is the song"