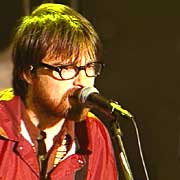 Needless to say, the band's summer tour should be interesting.

Dates have not been announced, but Wilson and frontman Rivers Cuomo said Weezer will spend six weeks hitting amphitheaters across America with Dashboard Confessional beginning in mid-July. The Stokes will also join the bill on a couple of dates.

"It's gonna be awesome," Wilson said. "The sound just goes. In an arena, it sounds stupid, but when we hear stuff and it goes out and then it comes back, it has a certain feeling to it, but in these places, it just feels like the sound you make goes forever. So we'll probably be more like, I don't know, Phish."

Cuomo seconded the notion, going as far as calling Weezer a power-pop Phish. Considering the band's loyal fanbase, which has been following the group on the road and trading set lists and bootlegs, and the way Weezer have been jamming lately, he's got a strong case.

Wilson explained how at a recent show in Tucson, Arizona, the band played four new songs in a row and approached their classics in free-form fashion. "I felt like I was in Tool," he said. "It was so cool. I hope to hear [a tape of the show] sometime and agree with my previous statement."

Weezer's summer tour will promote Maladroit, which debuts at #3 on this week's Billboard 200 albums chart. Many are calling it the band's most rocking record, which Wilson attributed to the past year the band has spent on the road.

"We've been playing [the new material] live so much that after awhile I think it just makes you wanna rock harder, 'cause you just kind of get a tolerance to that level and you just wanna keep going," he said.