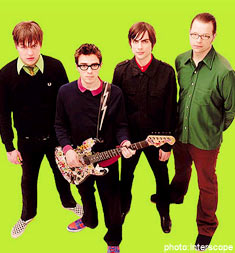 Plan for world domination:
1) Release refreshingly poppy self-titled debut album
2) Follow it up with an album of difficult, dark, emotionally-twisted songs named Pinkerton
3) Disappear for four years amid rumors of breakups and breakdowns; lose your bassist
4) Return with 28 minutes of more refreshingly poppy tunes on another self-titled album
5) Pick a drug-referencing song most media outlets can't or won't play as the first single (and include gratuitous pockmarked-sumo-wrestler-butt shots in the video)
6) Sit back and have the last laugh as your tour sells out and the album debuts in the Billboard top 5


Now this formula won't work for everyone. But for über-dweebs Weezer, it's been golden. When they emerged from several years of silence this year to headline a tour, their fans came out in force. The band — mastermind/singer Rivers Cuomo, guitarist Brian Bell and drummer Pat Wilson — recorded their third album with new bassist Mikey Welsh. When it was released in May, their parched fans again turned up for the party.

Sure, everyone wants to be their best friends again, but that doesn't mean they want to explain the inspiration behind songs like "H*** Pipe" and "Island in the Sun." On the contrary, when MTV News' Gideon Yago stepped into the ring with the band, they were more psyched to talk about the difference between Elmo and emo, playing shows in clam shacks and why their next album might be 10 hours long.

Gideon Yago: After five years, we get a 28-minute record. What gives?

Pat: People are just generally ungrateful, I think. Come on, Van Halen 2 is, like, 27 minutes.

Yago: I guess after five years, people feel like ... there are all these stories that there's all this material ...

Mikey: Well, if you do the math, it all makes sense. Five, 28 minutes. It's perfect. Ten songs.

Brian: There's no filler. Just think of all those records that are 45 minutes that ...

Rivers: Go on Napster. We recorded nine other songs in addition to the 10 on the record. Go download 'em, it's free. Stop complaining. [Laughs]

Yago: You guys just finished a promo tour. Was it good for you?

Brian: It was great meeting all the fans.

Yago: What was your favorite venue that you played on this tour?

Pat: [A] skate park in Detroit. I can't remember the name. It was just awesome.

Brian: I think I liked playing at the boxing ring in Philadelphia.

Rivers: The boxing ring was cool.

Mikey: We played in a little clam shack on Cape Cod.

Pat: That was actually pretty cool.

Yago: Was it fun for you to play at these small venues? What was it like dealing with the fans?

Pat: It's cool to have them right next to you while you're playing. It reminds me of playing in a club. But you only have to play half as long.

Yago: What happened this time? Where did the keyboards go? No Moog, no Farfisa, no organs?

Brian: We've always been primarily a guitar/bass band. There's keyboards on the next record, though.

Yago: Are you guys happy with this record?

Yago: Why were you in such a rush to go back in the studio and record new stuff, then? You recently had a 10-hour demo session in D.C.?

Mikey: Yeah, the next record's gonna be 10 hours long. [All laugh]

Pat: To make up for all the people who are complaining.

Mikey: We're just really excited about all our new songs.

Brian: The songs are great. These songs that are on the new record we've been living with for over a year now, so ...

Rivers: The new songs are better.

Yago: What are you so happy about with the new songs?

Rivers: They rock harder. They're more fun to play on the guitar.

Yago: What does the new stuff sound like? Just harder guitar?

Yago: When do you think this [new] stuff is going to make it to record stores?

Brian: But it's sure to be on eBay before that.

Pat: We're actually releasing the album on eBay, 'cause we think we can get a better royalty rate.

Yago: Is there any way that any of the material you've worked on between Pinkerton and this album ... is that going to come out in 10 years on something like the Franklin Mint Best of Weezer collection ...

Rivers: No, I think we come up with songs so fast that we just forget about the old songs. They're gonna rot in obscurity.

Yago: What was your vibe going into writing this record? I mean, after taking so much time off.

Brian: We did it so fast 'cause we knew what we were doing.

Yago: Was there was all this material busting out of the seams?

Yago: Are you guys all writing collaboratively?

Pat: Well, we come up with our own parts. Which is cool.

Rivers: I think there's more collaboration now than there ever has been. A lot of wheedling.

Yago: What do you mean?

Mikey: I think the songs just develop. We all seem to be listening to each other and playing off each other more individually.

Brian: So something Mikey does, I'll play a counter [melody] to that.

Yago: I read that you guys had to wrangle with the label about getting "H*** Pipe" to be the first single.

Brian: I think they wanted "Photograph."

Yago: Do you guys feel vindicated now that it's such a big hit?

Pat: The artist generally is right.

Rivers: We just had to prove that once again.

Yago: Is it weird to see "H*** Pipe" wedged in rotation on "Total Request Live" next to Britney Spears?

Brian: It would be weird if I watched that show.

Pat: It's awesome. I watched it. I think it's natural.

Mikey: I like O-Town. I think we go good with O-Town. We could do a tour [together].

Yago: But when you guys put out the first record there was such a different climate in music.

Yago: The week that album came out, half the acts on the Billboard charts were rock acts. Do you think that's a sign that there's a crack in pop's strength?

Pat: Yeah, we're like the head of a V-formation of rock ducks flying south.

Mikey: Wouldn't we be flying in a W?

Yago: Are you guys surprised that there are so many young kids who are buying this record and who are at your shows who must've been in grade school when the first record came out?

Yago: What do you think accounts for that phenomenon?

Brian: Didn't you always listen to your older brothers' and sisters' albums?

Yago: Yeah, I did. He listened to crap.

Yago: I read a review that said if you take the first album and subtract the second album, then you get this album. How do you guys respond to that?

Pat: That's advanced math right there. I dropped out before calculus, so I really can't comment.

Mikey: I'm not very good at math. But it sounds like he spent a lot of time thinking about that, though.

Yago: I think the point they were trying to make is that a lot of the emotional stuff, personal stuff ...

Pat: Subtract the emotion from the first record.

Yago: And replace it with something that is more hook-heavy and has less personal emotion? Do you think that's gonna make it hard for the kids who buy this album to identify with you as a band?

Pat: I think most people just want to put on a CD and rock out.

Yago: But you've said Pinkerton is hard for you to listen to.

Rivers: It's always been hard to listen to.

Yago: So are there going to be no more songs about isolation and alienation, unrequited love?

Yago: Once and for all, what's with the emo thing? Why does everybody tag you guys as an emo band ...

Pat: I don't know, man. You tell me. I thought Fugazi was emo.

Brian: Well, first there was Grover. And he had a sidekick, and then all of a sudden this emo character has his own movie.

Pat: I don't know how we got tied into it, but, man. I haven't seen any checks.

Yago: Would you consider yourself emo?

Mikey: I thought those were just rock bands.

Yago: What would you say is different about touring this time?

Brian: I say we're all different. We listen to each other more. And the band's just a stronger rock and roll band, man.

Pat: I agree with that.

Rivers: I don't remember what it was like. I think I drank too much before. It's all just a blur.