When I was 7, my family built a house. My parents said I could paint my room any color I wanted. I painted it my favorite color, a specific shade of blue. When I was thinking about a cover for the first Weezer album, I wanted it to be that same shade of blue. This mode of nostalgia for the lost innocence of childhood was the same source of my "look" in the Blue album era--the glasses frames, bowl cut, dickies, blue t-shirt, and windbreaker from my childhood photos.

...when the Blue Album was being recorded, there was a lot of brainstorming going on as to what this record would look like. I kept coming up with what I can say in retrospect were some rather kooky ideas, and Rivers kept pushing for something simpler. Finally one day Rivers dug out a cassette (remember those?) he had bought around that time, a cheapo Best of Beach Boys collection called "Do It Again". "Do It Again" was never issued on vinyl or cd as far as i know, and is most likely to be found in those handy truck stop stores out in the boondocks. However, the cover was really cool in its own rather hokey way, featuring the Beach Boys smiling for the camera, standing in a line of sorts, with a soothing blue background. Rivers said we have to achieve this effect on our cover, and so the idea of lining the guys up in striped shirts in front of a blue background took form. The guys actually went out and found 4 matching striped button down shirts, and in fact in late 1993 played at least one show wearing them, much to the contempt of the LA scenesters of the era. Noted 60's fashion photographer Peter Gowland was contacted to do the shoot, as his mellow pastel colored shots of girls in bikinis and guys out golfing had the exact "anti-90's" feeling we needed. To Peters sprawling Lloyd Wright-esqe 50's house we went, which was complete with a near-clone of 'Alice' from Brady Bunch manning the kitchen. The guys started the shoot in the striped shirts, but everyone later concluded that the photos looked better with everyone wearing regular clothes. Next spring, when the cover started becoming known to the local LA scene, the band met with immediate flak for ripping off the Feelies' 1980 album cover for "Crazy Rhythms". This was baffling to the band, who had never even heard of the Feelies before that point! But sure enough, the resemblance was unmistakable. It just goes to show how difficult it is to do something new by doing something old. 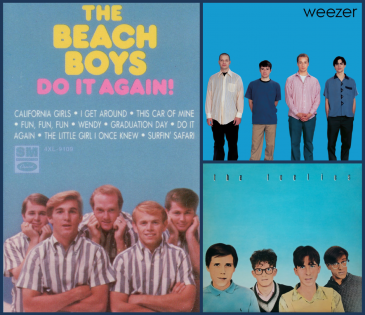 More info about the Blue Album

Getting Up And Leaving

A song I wrote with Patrick Wilson. We demo'd it for Ric Ocasek for The Blue Album, but it didn't make the album. Then we were going to make it a b-side for Pink Triangle, but that didn't happen. I revised the lyrics for the Pinkerton version, but the one on Pinkerton Deluxe has the lyrics that were from 1993.

Back in March of 2008, with the Democratic and collaborative efforts of the Red album in mind, I turn that concept toward the fans. Similar to my thinking and approach with the Hootenanny's of 2008, “they can all play instruments/Weezer songs and write songs too.” \r\n\r\n

came to be on March 19, 2008 after I posted a link to Step 1 and 2 on YouTube and MySpace. The concept morphed and changed over the next 8 months across many videos and 16 steps. Ultimately the final version of the song, titled “Turning Up the Radio,” didn’t make Raditude after sending it to the wolves. However it did find a place on Weezer’s Death to False Metal in 2010. \r\n\r\nIn all the song featured cowrites with 16 fans. A. Rob Carballo, Paul Dutton, Nishant Thakur, Daniel James Kelsch, Justin Vail, Taylor Morden, Reshad Malik, Daniel Powell, Sam Mitchell, Lauren Sonder, Mike Danger, Kingsley Vanata, Joshua Godinez, Patrick Gannon, Ryan Wiesbrock, and Cameron L. Maris. Production was done heavily with Taylor Morden laying most of the ground work.

I prefer the Big Five (OCEAN) to MBTI, and like learning about other people’s scores. I have not taken the test because I know my personality pretty well. I am an introvert.

Though the MBTI resembles some psychological theories, it is generally classified as pseudoscience, especially as pertains to its supposed predictive abilities. The indicator exhibits significant scientific (psychometric) deficiencies, notably including poor validity (i.e. not measuring what it purports to measure, not having predictive power or not having items that can be generalized), poor reliability (giving different results for the same person on different occasions), measuring categories that are not independent (some dichotomous traits have been noted to correlate with each other), and not being comprehensive (due to missing neuroticism).[9][10][11][12][13] The four scales used in the MBTI have some correlation with four of the Big Five personality traits, which are a more commonly accepted framework.[14]