Sheezer was an early 2010s Weezer cover-band comprised of female Canadian musicians. Various Weezer members have expressed admiration for them, and Rivers Cuomo invited them to join a future Weezer Cruise[1].

Outside of Sheezer, Each band member also plays in a notable Canadian indie rock band. This includes By Divine Right, The Hidden Cameras, Our Lady Peace, and The Bicycles[2]. With limited exceptions, the band played material from The Blue Album and Pinkerton. The band toured Canada with Born Ruffiansin 2011[1].

Weezer and Sheezer interacted after the former's performance at the 2015 Sound of Music festival in Toronto. This was during the Memories Tour. As Sheezer member Robin Hutch explained to Noisey that year:

We went up to Scott Shriner first, because he seemed like the most accessible of the band members. We talked to him first and then Patrick Wilson, who was from Buffalo, so he mentioned that and said he knew us location wise. He was really funny. And then we watched the Weezer set, and right after they basically came right up to us backstage. Rivers asked if Laura was him, like, “You guys are Sheezer. Are you me?” to Laura. So that was really cute to hear.[1] 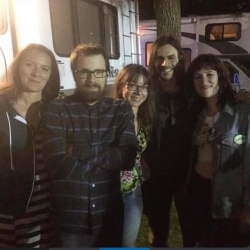 In a retrospective of the band upon their dissolution, the Toronto Star called Sheezer "a steady presence in a [music] scene where women playing rock remain underrepresented."[2]