The Encyclopedia of Pop 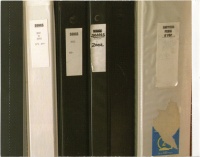 A photo from Alone II liner notes with Cuomo's binder.

The Encyclopedia of Pop is a three-ring binder filled with charts created by Rivers Cuomo in 1999. It documents and dissects every song written by Kurt Cobain of Nirvana, as well as songs by Oasis and Green Day, in a mathematical manner. According to Todd Sullivan, Weezer's A&R man, "(Rivers) figured if he could home in on Kurt's formula, he'd figure out his own formula. That way, he would be a never-ending supply of songs."

In the booklet for Alone 2: The Home Recordings of Rivers Cuomo, Cuomo explains his "IAEVC," "Incipit-Melody-Guitar-Develop-Tea," and "Arbitrary-Progression-Distortion-open-Strum-Intro-Melody-Arrange" methods of writing songs, which were created and used with The Encyclopedia of Pop.