Yngwie Malmsteen is a swedish metal guitarist. Born on June 30, 1963 as Lars Johan Yngve Lannerbäck, he went on to pioneer the heavy metal subgenre, becoming well known in these circles for his neoclassical style of playing. 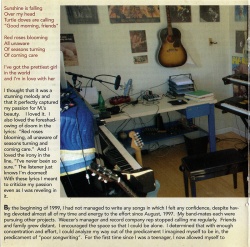 Rivers Cuomo has often cited Malmsteen as a large influence on his style of guitar playing, and has referenced him in numerous interviews, songs, and in other official Weezer material.

A poster of Malmsteen can be seen on Cuomo's wall in the Alone II booklet, alongside other posters of artists he has considered to be influential. Cuomo has also admitted that he used to play in a Malmsteen cover band in high school.[1] In an interview with Guitar.com, Cuomo states he moved to Los Angeles in 1988 "with the intention of becoming a huge rock star who played Yngvie Malmsteen type music."[2]

Cuomo has stated in an interview on The Howard Stern Show that the Pinkerton map on the CD tray includes the names of those who influenced him during the recording of the album. One of the names featured is Malmsteen's.

Cuomo appears wearing an Yngwie Malmsteen t-shirt on the cover of Guitar World Magazine in 2002.

During a Reddit "Ask Me Anything" done in promotion of the 2014 album Everything Will Be Alright in the End, Cuomo was asked about what his favourite Malmsteen song was, to which he replied "Far Beyond the Sun".[3] Malmsteen is also mentioned by name in a demo for the 2015 fan club single "Everybody Needs Salvation".

In an interview with Michael Astley-Brown of Guitar World Magazine, Cuomo talked about how when they were recording The Blue Album he would play "some Yngwie Malmsteen shit" that would impress Ric Ocasek, but that this style of playing was never put into tape until Van Weezer.[4]