From Weezerpedia
(Redirected from AOL Sessions (2005))
Jump to: navigation, search

The Sessions@AOL in 2005 were Weezer's first Sessions@AOL performance, and they took place on on November 1, 2005 at Capitol Studios' Studio A in Hollywood. Five songs were performed live in the studio, and therefore are presented in their sometimes altered 'live' versions. The performances and a interview shot on the same day debuted on November 18, 2005 on the AOL Sessions site. Also, backup guitarist Bobby Schneck, who accompanied the band on the Make Believe Tour, performed with the band. Later, a Best Buy promo DVD was released featuring three of the performances. 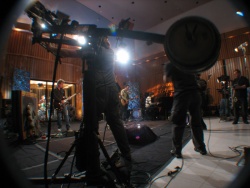 This performance is very similar to the single version, excluding all the flubbed notes sung by Cuomo. It includes the altered chorus vocals and background vocal of "perfect situation" during the outro. 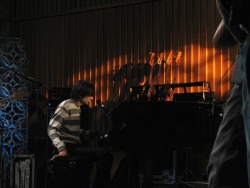 Brian Bell playing the piano at the AOL Sessions

This version of "Buddy Holly" includes the guitar/synth intro played on the Make Believe Tour. This live session was performed following the Make Believe tour, and as a result Cuomo's voice is somewhat hoarse. His voice cracks many times throughout the song, most notably on the lyric "What's with these homies dissin' my girl?" Auto Tuning is used significantly on this song and all the other songs from the 2005 AOL Sessions.

The so called 'new-wave' version of "Don't Let Go". It includes a synthesizer arrangement, which, according to many fans, greatly improves the song. Brian plays lead guitar and synthesizer during this performance and Cuomo only sings.

Island in the Sun

This version of "Beverly Hills" includes the notable "extended talk box solo" played by lead singer Rivers Cuomo, which is considered by some fans the "saving grace" for this song. In this performance, the background vocals "gimmie gimmie" are performed by Scott Shriner and Brian Bell instead of the female vocals on the album version.