a video for weezer's first single, el scorcho, for their upcoming 2nd album, was shot in los angeles during the later half of summer 1996.

the video was originally directed by mark romanek (known for videos by beck, nine inch nails, and madonna to name a few), but was left uncredited after disagreements about the production of the video. the band actually read a treatment for the video from spike jonze, but it was a little too wild, and they passed it up. spike's participation on weezer's pinkerton efforts was limited to promotional band photographs. el scorcho had its world premiere on mtv's 120 minutes. it was one of the very first videos to be played that night. el scorcho recieved small play time on mtv outside of 120 minutes.

the theme for the video if fairly simple. the band is in a sort of rehearsal hall, with recording equipment and an arrangement of lights while singing "el scorcho". not doing a video like buddy holly, provides maximum time for rock and roll suave as seen with brian bell's headthumping, matt sharp's defiant howl, rivers cuomo's out-of-focus sincerity, and pat wilson's sarcastic drum stature. the band also had a neat "weezer" light appearing in the back during the video, which was later changed to "weerez" for reasons unknown [or "artistic license" as matt and pat said].

it was around this time that rumors surfaced that rivers was making demands to have the camera focused on him for 70% of the video, so matt and pat decided that in order to make the most of their 10% of camera time, they would have to act as crazy as possible...which they did, making a very entertaining contrasts to rivers' earnestness and brian's earnest rocking.

Weezer Memories Dispatch #6:
In August '96 Weezer made the "El Scorcho" video in a old dance ballroom space in an unused building in downtown L.A. The stories of the band and director Mark Romaneck not getting along very well on set and during editing are well known - Mark refused to finish editing the video because he wasn't being given the final cut, which left Rivers to do it with the bands manager. Years later, they all reconciled and Mark's final cut of "El Scorcho" was the one featured on the Weezer DVD in 2004.

Less known was the fate of the light up "weezer/weerez" letters featured in the video. In fact for over 10 years, it was assumed they had been destroyed or otherwise lost or abandoned. No one knew what had become of them. For a long time, weezer fans speculated on where they were and what to do with them if they turned up (namely, put them in their bedrooms, etc).

Fast forward to 2008. The red album was out, and Raditude would soon be recorded starting that November. After several years of uncertainty the bands biz was getting organized, with band, crew, management, etc all on the same page for the first time since the old days. One of the many projects undertaken in this new era was the clean out of the bands old storage facility. Crew guys Doug and Brian were assigned to catalog and deal with the mess, sorting out what the band didn't need, what was trash, what to do with the unwanted stuff.

I got a call from them after they were at it for a few days, and they pleaded for me to get down there and help them I.D. what in the world some of the stuff was and what to do with it. There were giant crates and totes full of old touring paraphernalia (old unused passes, paperwork, etc etc), a bunch of random furnishings and weird stuff (including a light up world map globe and a bmx bike) and a lot of music equipment that no band member had claimed and no one needed now.

I helped out by telling the stories of certain things so they knew what to do with them, packing up the passes etc for my own archive files, and then we made the discovery: underneath a ton of boxes were these giant letters. As soon as I saw them I knew they were the lost "El Scorcho" letters. The photo is what I saw only seconds after the discovery.

And so where did they end up? In lieu of anyone having a better idea, I drove them across the country and now they are safe on a shelf in my garage. -karl 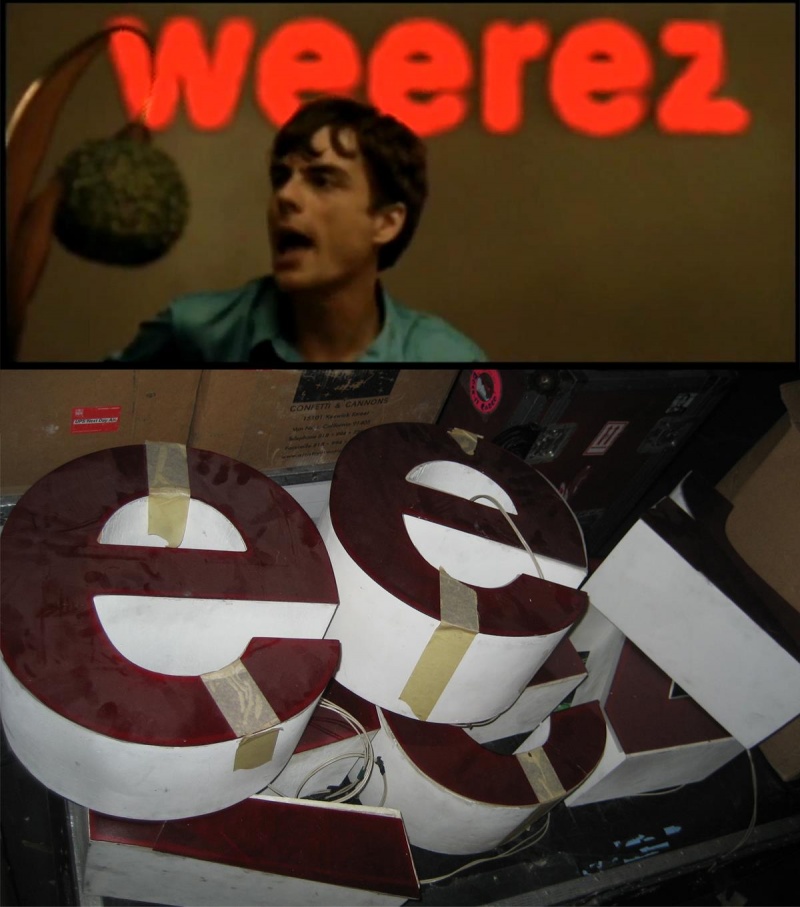