Lost in the Woods

"Lost in the Woods" is a song written by Robert Lopez and Kristen Anderson-Lopez for the 2019 animated Disney film Frozen 2. The song is performed in the film by the character Kristoff (Jonathan Groff) and is performed by Weezer for the film's closing credits. 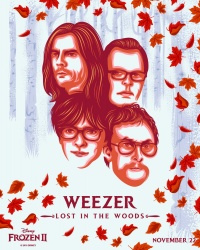 On a November 8th episode of The Ellen DeGeneres Show, guest Kristen Bell divulged to guest host Ken Jeong that a music video for Weezer's cover of the song was forthcoming [3]. The video was released online on December 12, 2019. The video features Rivers Cuomo dressed as the character Kristoff, Pat Wilson as Krisoff's reindeer companion Sven, and Kristen Bell as Anna.

Again you're gone, off on a different path than mine
I'm left behind, wondering if I should follow
You had to go and, of course, it's always fine
I probably could catch up with you tomorrow

But is this what it feels like to be growing apart?
When did I become the one who's always chasing your heart?
Now I turn around and find I am lost in the woods
North is south, right is left, when you're gone