"Miss Sweeney" is the eleventh track off of The Red Album (Deluxe Edition).

"Miss Sweeney" first appeared on the demo compilation Deliverance at Hand! in 2007, and was co-written by Rivers Cuomo and his assistant Sarah C. Kim. In the liner notes for the deluxe edition of "The Red Album," Brian Bell states that "Miss Sweeney" is a song that he championed, and that it was almost not recorded at all:

Brian: I'm really happy about the inclusion of "Miss Sweeney" to the deluxe edition of The Red Album. This song has always been a favorite of mine since Rivers first sent me the acoustic demo of his songs for album six. I fought and fought for this song to make The Red Album but in the end was voted out. And here it is in all it's unique glory. I got the idea for the guitar sound from a suggestion that Scott Shriner made. He said he thought sitar could work on Sweeney and I agreed. I even had our engineer Andrew Scheps schlep his to the studio one day. It only took me a few seconds to realize that I couldn't play this thing with any conviction. So I was on a quest to find an effect with sitar like qualities. My engineer Eric J heard about this pedal the Mooger Fooger that just came out. This pedal allows one note to drone while playing others against it. A little knob tweaking here and there and a exotic almost Indian like sound transpires making the rain clouds disappear.

Weezer performed "Miss Sweeney" their AOL sessions in 2008. The performance was all-acoustic, with Bell and Patrick Wilson playing guitar, Scott Shriner playing an acoustic bass, Rivers Cuomo singing from behind a desk, and a dancer performing as "Miss Sweeney."

Nearly all Weezer fans who have heard "Miss Sweeney" have expressed great fondness for the song. It is often called a "return to form" for the band by fans. However, the live video mentioned above was criticised heavily on the AllThingsWeezer forums for Cuomo's vocal performance, as many fans claimed it lacked the emotion that makes the album version so well-liked. Teenage Victory Songs, the Weezer songblog, in one of its longest, most engaging posts, awarded "Miss Sweeney" with a tag of "The Very Best." 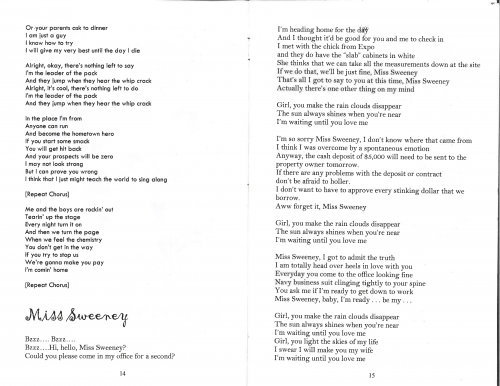 Hi
Hello Miss Sweeney
Could you please come in
My office for a second?
I'm headin' home for the day
And I thought it'd be good
For you and me to check in
I met with a gal from expo
And they do have the "slab" cabinets in white
She thinks we can take measurements down at the site
If we do that we'll be just fine, Miss Sweeney
That's all I got to say to you at this time, Miss Sweeney
Actually, there's one other thing on my mind-

Girl, you make the rainclouds disappear
The sun always shines when you're near
I'm waiting
Until you love me
Sweeney

I'm so sorry Miss Sweeney
I don't know where that came from
I think I was overcome
By a spontaneous emotion
Anyway, the cash deposit
Of five thousand dollars
Will need to be sent
To the property owner tomorrow
If there are any problems
With the deposit or contract
Don't be afraid to holler
I don't wanna have to approve
Each stinkin' dollar
That we borrow
Ah- forget it!

Miss Sweeney
Girl, you make the rainclouds disappear
The sun always shines when you're near
I'm waiting
Until you love me

Miss Sweeney, I got to admit the truth
I am totally head-over-heels in love with you
Every day you come to the office lookin' fine
Navy business the suit clingin' tightly to your spine
You ask me if I'm ready to get down to work
Sweeney, baby, I'm ready

Be my
Girl, you make the rainclouds disappear
The sun always shines when you're near
I'm waiting
Until you love me- Girl!

You light the skies of my life
I swear, I will make you my wife
I'm waiting
Until you love me