"The Answer Man" is a song written by Rivers Cuomo.

According to the Recording History, "The Answer Man" was initially recorded by Rivers Cuomo on January 23, 1991 (or possibly January 10, according to the Catalog O' Riffs). In the months following, Cuomo formed a new band called Fuzz with Patrick Wilson and Scottie Chapman. The band recorded "The Answer Man" at a practice on February 18 and a demo on March 9, though the band dissolved shortly thereafter. Later in 1991, Cuomo and Wilson formed the band 60 Wrong Sausages with Jason Cropper and Pat Finn. The band only lasted from October through November, but "The Answer Man" is known to have been practiced on October 28. A video, filmed by Karl Koch, of 60WS performing the song appeared on the Weezer DVD Video Capture Device in 2004.

The song was brought back after Weezer formed and began practicing beginning on February 15, 1992. The song is known to have been performed at least one more time, at a show at English Acid on October 21, 1992.

The song appeared on the spreadsheet The 4 and 5 Star Demos of Rivers Cuomo in 2008. Three recordings of the song are known to exist in fan circulation: The 60WS rehearsal footage featured on Video Capture Device, a version shared on Cuomo's personal website in 2002 (likely the Fuzz demo, by process of elimination), and Cuomo's solo Yeastmaster Pt. 1 demo, which was sold on the same website in November of 2020. 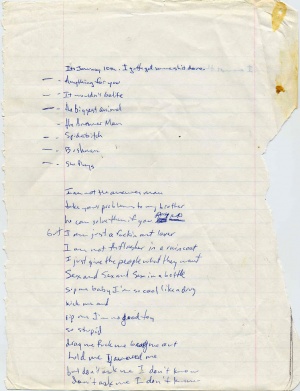 Handwritten lyrics for "The Answer Man".

I am not the flasher in the rain coat
I just give the people what they want
Sex and sex and sex in a bottle
Sip me baby, I'm cool like a drug.

I'm not the Answer Man